Marchers in Toulouse, south west France, say there’s more to life than working and then the grave (Picture: Revolution Permanente on Twitter)

Huge numbers of workers struck and demonstrated across France on Thursday against the government’s attempt to increase the pension age by two years. Around 400,000 marched in Paris, according to unions.

Nearly all local and regional train services stopped, buses and trains in cities such as Paris were “very disrupted” and high-speed train lines across the country were not running. The main teachers’ union said 70 percent of primary school teachers were on strike, with many schools closing for the day.

On picket lines and protests the slogan “Metro-Boulot-Caveau” was common. It says the pension changes mean “Travel to work, slog away—and then the grave”. Workers feel a mixture of bitter anger and fear over being forced to work until they drop.

Dominique, a retail supervisor told France 24 news, “I have worked in retail for 30 years. I’ve already had surgery on both shoulders to deal with tendonitis caused by all the repetitive movements and heavy loads.

“I’ve also had to get prosthetic thumbs on both hands. I’ve lost my joints from ripping and tearing boxes to put on shelves. So if I end up being told I’ll have to delay my retirement. I won’t be able to accept it. I’ve never gone on a protest or gone on strike in my life–but this time we’re coming up against something really unpalatable. If you ask too much of people, it just becomes unbearable for them.”

The proposed change to pensions from president Emmanuel Macron and his government is a big issue itself. But it also sums up the assaults workers everywhere and of all ages now face.

Strikers and their supporters joined around 220 demonstrations across France, with over two million taking part in total according to the CGT union federation. Even the official state rallies recorded well over a million on the streets.

In many cities the figures are higher than those of the great strikes of 1995, which broke a government.

The demos showed that the walkouts spread far beyond the core of public sector workers. In the northern city of Valenciennes, the march of 6,000 included car plant strikers from Peugeot and Toyota as well as council workers, teachers and students.

In Lyon, most of the march was made up of firefighters, health workers, teachers and council workers. But there were also big delegations from Total (oil), Solvay (chemicals), Renault Trucks, building workers and Castorama (DIY retailers).

LGBT+ groups, feminist campaigners, climate activists, anti-racist groups and undocumented workers joined the Paris demonstration. The Marche des Solidarités campaign group tweeted, “French people and migrants, same Macron, same fight! We can no longer go back. We must defeat this government. Fight the attacks on our pensions and against the new immigration law.”

Macron ran from France on Thursday by attending a French-Spanish summit in Barcelona to sign a Treaty of Friendship and Cooperation with Spanish prime minister Pedro Sanchez from the Labour type PSOE party.

But if the unions can be pushed to widen and extend the strikes he can be forced into another humiliating retreat. Union leaders have called another day of strikes and demonstrations on Tuesday 31 January–although many activists are angry they didn’t move quicker.  There will also be some more limited actions on 23 January, the day the pension attacks are formally presented to the Council of Ministers (senior cabinet members).

In France and in Britain it is a time of crucial class battles. 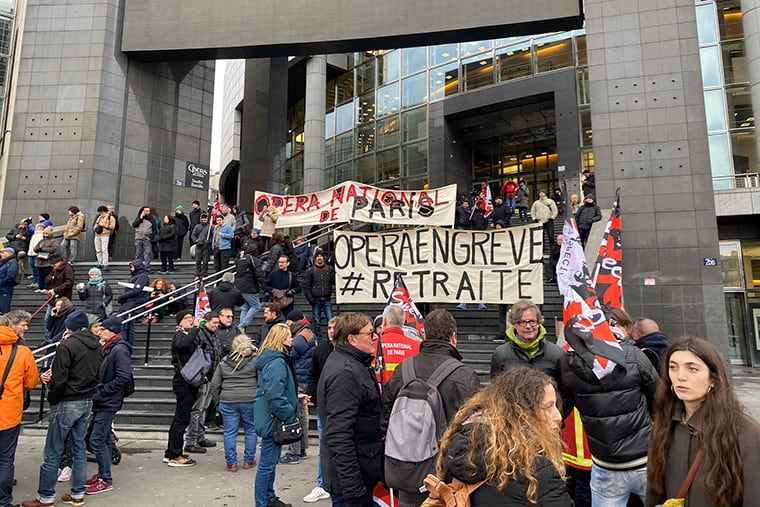 Philippe, a refinery worker, spoke to Socialist Worker from the demonstration in Paris.

“A great day, good to be out with everyone on the street and all the unions together. This feels different from other marches where you are on the streets but you don’t think it will lead anywhere. I don’t say we will win, but we could win. Macron can be brought down to size.

“As refinery workers we are well-organised and are discussing more action—a two-day strike then three days and then all-out to be renewable—voted on each day for as long as we want to stay out.

“We can do more than one day’s strike and possibly we can cause fuel shortages that paralyse the country. But this is not a battle that can be won by proxy strikes, one or more groups of workers fighting for the rest. You get isolated and then maybe demoralised and resentful.

“The refiners and the rail workers and the Paris public transport workers are in the lead. But the rest can’t just cheer us on and do nothing. This has to be a movement of millions.

“This is the discussion we are having. In some areas there were general assemblies of strikers during the day to demand that strikers have control over the next steps. At the moment they are mainly in the leading sectors, but this is a model we should try to spread.

“The spreading of the strike and the voting inside the strike must go together. The union has been not bad in calling today, but we won’t get the action we need unless there is a lot more of our own organisation. Then we can raise demands about beating Macron but also demanding a pension at 60, and much earlier for hard occupations.”

‘Workers are already broken by the job’

“Working as a bricklayer, it’s already a bit of a tall order getting to 60 in good health, even if you have a reduced workload.

“All day long, you’re coming up against oil, grease, cement, dust, everything there is in the building industry. You’re hammering all the time, it’s very hard on your body.

“A lot of my colleagues end up with cancer at 60. And even if you don’t get cancer, from the age of 50 onwards, you get bad knees, a bad back, carpal tunnel, damaged ligaments–you name it.”

“Some of my mates look broken physically—they walk around like ducks. They need constant help; they can’t walk normally anymore, they’re screwed. My back’s already showing bad signs, even though I’m not yet 30.”

French workers gear up for major national strike over pensions

Teachers in England and Wales deliver huge vote for strikes