The rising danger from fascists in Ukraine

Ukrainian fascists say they will sabotage any peace deal with Russia 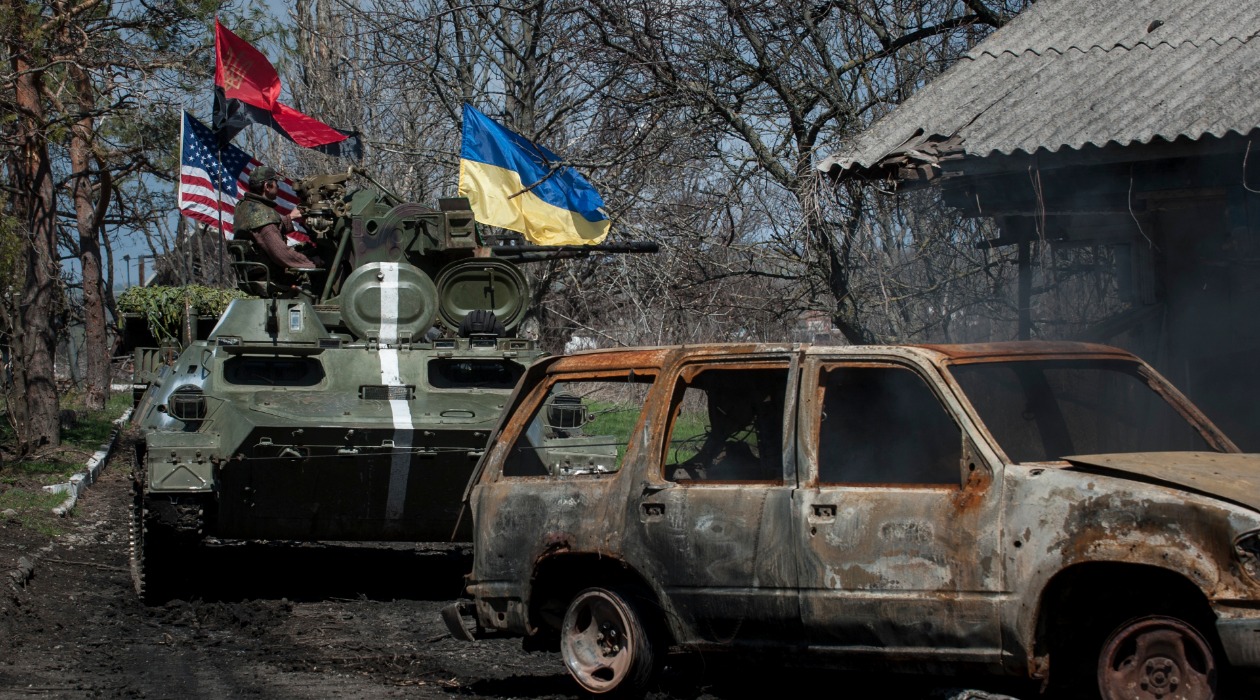 Ukrainian soldiers ride in an armored vehicle flying the flags of the United States and Ukraine along with the red and black banner of the fascist Right Sector group. Shyrokyne, eastern Ukraine. | Evgeniy Maloletka / AP

While much of the world struggles to find a way out of the Ukraine crisis, influential fascist groups inside and outside the government there are vowing to stop any peace deal with Russia that they don’t like. Even more worrisome is that the Ukrainian government, led by President Volodymyr Zelensky is trying to use its ties to the far right as leverage against peace efforts underway by urging the fascists and nationalist groups to arm themselves more heavily.

Yuri Hudymenko, leader of the Democratic Axe, is heading up just one of the dozens of dangerous right-wing organizations involved in the mobilizing and threats. He gave an interview Thursday to the New York Times in which he declared his organization, which is a political party in the Ukrainian parliament, is steadfastly opposed to any compromises with Russia.

He did not reserve his threats for just Russia and made it clear that the country’s fascists and nationalists are prepared to take up arms against the Ukrainian government itself if it makes any compromises. “We’ll deal with Russia one way or the other,” he declared, before adding emphatically, “if anybody from the Ukrainian government attempts to sign such a document (a peace deal), a million people will take to the streets and that government will cease being the government.”

Russia continues to say that its placement of more than 100,000 troops in the area of its territory near the Ukrainian border is not part of a plan to invade, and Russian President Vladimir Putin said Thursday he plans to continue to support negotiations which seemed to make headway this week with ideas floated by French President Emmanuel Macron and others.

Those ideas include the revival of the 2014 Minsk Protocol and arrangements that would see a neutral Ukraine which promised never to join NATO. Those are key Russian demands. Putin says he will meet again with Macron to discuss these ideas.

Meanwhile, President Joe Biden continued his war talk, urging Americans in Ukraine to evacuate the country immediately. The U.K. has followed up with similar demands. Those warnings are seen by some in the diplomatic community as increasing the possibility of open hostility. “It makes us think,” Russian foreign minister Sergey Lavrov said, “that they (the West) are planning something.”

Unfortunately, the Western media continues to issue reports that encourage war hysteria. U.S. and Western European press outlets are describing the current joint Russia-Belarus military maneuvers in Belarus as a new buildup of preparations for an invasion of Ukraine by Russia. The maneuvers, however, are an annual affair that has been conducted for at least ten years now, and Russia has said its troops will leave on Feb. 20 when they are ended. Meanwhile Western maneuvers involving thousands of U.S. troops continue in numerous countries on Russia’s borders.

At least some of the motives, if not all of the motives, for Russia’s placement of troops near the Ukraine border are clear. The result of that placement has been, for the first time since the end of the Cold War, widespread international discussion of the security needs of Russia, something NATO has never been willing to entertain until now.

Meanwhile, evidence of the growing fascist threat in Ukraine continues to mount.

Even more dangerous and more powerful than Democratic Axe is the Right Sector, one of the groups which the Ukrainian government has urged to arm itself more heavily. The Right Sector has supplied arms to Democratic Axe, which even though it is a political party, regularly stages operations that involve arming its membership. The Right Sector has led armed demonstrations in Kiev on a regular basis, including demonstrations in support of the original 2014 right-wing coup in Ukraine.

Alexander Ivanov, the director of yet another fascist organization called the Resistance Movement Against Capitulation, on Thursday announced plans for massive demonstrations this weekend involving his organization, the Right Sector, Democratic Axe, and numerous others.

Outrageously, Ivanov has been saying that a Russian invasion is only a possibility but that the overthrow of the Ukrainian government by the massive fascist coalition is a “certainty” if it makes any compromises.

In addition to the Ukrainian government caving in to the openly fascist groups by urging them to arm more heavily, many of the other Ukrainian political parties, with the exception of the Communist Party, are also saying they oppose any compromises.

Hudymenko, the head of Democratic Axe, has a record of violent activity. He was a major planner of the original 2014 coup and the armed demonstrations accompanying it in Kiev. He spent several months in jail for blowing up a statue of Joseph Stalin, according to the New York Times, in his hometown of Zaporizhzhia in eastern Ukraine.

He brushes off the danger of war, saying that war is nothing new and that Ukraine has been at war with Russia “for centuries.” The possibility of a wide war in modern time involving powers with nuclear weapons seems to be of no concern to him or to the nationalists and fascists that appear to have a stranglehold on the Ukrainian government, if not on the Ukrainian people themselves. NBC correspondent Richard Engels said on MSNBC Friday morning that people on the streets in Ukrainian cities remain unworried and continue to say they expect no invasion by Russia.