Is a Revolution in Lebanon in Sight, Now?

According to the old Phoenician legend, Lebanon dies but repeatedly rises from the ashes. After historic fires, foreign invasions, and civil wars, this adage seems to ring true, especially for the Lebanese who have always thought of themselves as survivors. However, when you add the deep-seated corruption and criminal negligence—evidenced by the deadly and destructive explosion on August 4—to all the calamities, it is hard to see Lebanon rising again.

With hyper-inflation knocking at the door, electricity to residences rationed like never before, and the coronavirus already testing national hospital capacities, Lebanon’s economic crisis is unprecedented in its eighty years of existence as a modern state. One would have to go back prior to its 1943 independence—to World War I and the final days of the Ottoman Empire—to find a similar record of starvation and deprivation. A small country with a population of over 6 million, Lebanon hosts close to a million and a half Syrian refugees as well as approximately 300,000 Palestinians still classified as refugees by the United Nations Relief and Works Agency for Palestine Refugees in the Near East (UNRWA).

Basic services, such as water, electricity, and sanitation have dwindled at an alarming rate, not to mention public education and public health. On top of all of these challenges, a financial crisis, precipitated by burgeoning international and domestic debt, has siphoned off the country’s hard currency. This has placed nearly two-thirds of the population in a situation where they have limited access to their bank accounts—many Lebanese, be it dual national or not, have US dollar accounts—and therefore must pay for food and other necessities with the much depreciated Lebanese Lira.

It has become clear, at least since the uprising that started in October 2019, that what the Lebanese are protesting is not a simple case of financial mismanagement, but a fundamentally flawed system that superimposes sectarianism, feudalism, and corruption on every decision made at every level of government. This system, dating back to the National Pact of 1943, has historically led to stalled government-formation, failed governments, and violent clashes—the most protracted of which was the fifteen-year civil war from 1975 to 1990.

The Pact was a grand compromise between Lebanese who wanted to be part of the greater Arab world and those who wanted to remain isolated from regional disputes, preferably under the wing of France, which ruled the country under a mandate until its independence. This demanded consensus on major decisions—whether domestic or foreign policy issues—in order to maintain a no-victor-no-vanquished formula and preserve Lebanese unity. The problems inherent in this system grew over the years instead of being gradually phased out. Practically every position in government had to be apportioned according to sect, which meant patronage to parties both religious and secular over job allocation, government-awarded contracts, and the importation of all goods and services. The corrupt allocation of this bounty worked—albeit at the expense of comprehensive economic development and the efficient provision of basic services to all citizens—as long as consensus prevailed over the division of the spoils of governance

The rebuilding of Beirut in 1990, largely the initiative of the late prime minister Rafik Hariri, had a stellar impact on the revival of downtown Beirut, which was devastated by fifteen years of bloody civil war. However, the rebuilding was and has remained controversial in Lebanon and many even blame the current crisis, at least in its fiscal dimensions, on the means used to revive downtown Beirut. The reconstruction projects, mostly undertaken via Solidaire (though it was open to small investors), was largely owned by the Hariris and wealthy investors from the Gulf. The Lebanese state obtained large domestic and international loans, causing public debt to balloon to $40 billion by the end of the decade—a figure that doubled by 2015. The reconstructed downtown Beirut became a protest battle zone when the garbage crisis erupted in 2015 (trash was not picked up for months because there was no consensus on who would assign the contract to which company).

Furthermore, the reconstruction did not extend far beyond Beirut city limits, drawing criticism that regional favoritism was being practiced. The controversy also set off fierce competition by various Lebanese factions for contracts and percentages of investments in foreign companies that were invited for other modernization projects. Solidaire essentially opened up new avenues for corruption to a country already burdened by it. Transparency International ranked Lebanon 137th out of 180 countries on a corruption matrix for 2019. The International Monetary Fund and the European Union are currently considering helping Lebanon out of its fiscal crisis and have stipulated serious reforms, especially with the aim of ending corruption.

There are two logical pathways out of the current chaos in Lebanon: revolution or reform. The first option requires strong leadership, organization and, even if a non-violent strategy is adopted, preparing for the risk of protracted violence. The second option requires an agreement by Lebanon’s powerful elite to start a new chapter, gradually developing the ability to conduct business without corruption. This could possibly occur on the basis of forgiving past transgressions—something that would require consensus around a truth and reconciliation approach to transitional justice.

The popular movement that started in October 2019 aspires to totally uproot the Lebanese system of governance. It is most often referred to as a hirak or “movement,” although their preferred slogan is thawra or “revolution”. Various groups quickly coalesced in what eventually came to be known as the Revolutionary Coordination Committee, eventually totaling over sixty groups. Nevertheless, the Revolutionary Coordination Committee’s spokespeople have been clear that they do not represent all those demonstrating or even all those who are members of the committee.

The protesting groups have been largely from professional or syndicate groups, such as retired military officers and teachers unions, regionally based groups, such as The Pulse of Nabatiyeh and Hirak Sour of Tyre, and civil society organizations. Only minor political parties have joined, like the regional branch of the Syrian Social Nationalist Party (SSNP) from Nabatiyeh and the Green Party. Their demands range from specific goals, such as the resignation of the Saad Hariri government and the formation of a non-political cabinet, to broader ones, such as “dealing with economic and fiscal pressures and rooting out corruption.” In the case of the latter goal, the Hirak demanded the recovery of stolen funds “from all those in authority since 1990.”

The revolutionary potential of the protestors remains minimal, due to the lack of unity around a single vision and the lack of specificity on overall strategy. So far, none of the major parties have committed to the cause and the sectarian-based parties, in particular, retain a large enough following to thwart any movement of consequence that threatens their power base.

The Taif Agreement, which ended the Lebanese civil war in 1989, included legislative, financial, and sectarian reform suggestions. The sectarian balance between Christians and Muslims in public office was changed from a 6:5 formula in favor of Christian representation to a more equal 6:6 formula. The powers of the presidency were shaved to become co-equal with those of the prime minister. In recognition of the negative impact of corruption, the agreement recommended the institution of an investment board to oversee large contracts awarded by the state. Ironically, the sectarian reforms were the only ones that were implemented without hesitation. What stood out in later years was the lack of movement on a second chamber of parliament, which was suggested in the agreement as a way of phasing out sectarian representation by relegating it to an upper house that included few actual powers.

It is essential to linger further on this point because it is obvious that sectarian representation not only stifles government when consensus is unavailable, but also lends the power of patronage to sectarian-based parties and, thus, solidifies their hold on power. A lower chamber with real powers unfettered by the need to equally represent the sects would open the way for forces truly vested in reform; i.e. secular political parties and independents representing civil society activists.

The protesters have repeatedly demanded the “repatriation of stolen money” and the punishment of those who have blatantly used their public office for private gain. The problem, as the activists well know, is that practically everybody in public office has been involved in the theft of public funds to varying degrees as early as 1990, but likely since the inception of the republic. Therefore, it is simply impossible to expect public officials to try one another. Nor could you even begin with one token official, since the “why me” cry would go out and that official’s sect would feel victimized.

Another option would be to let bygones be bygones, issuing a blanket amnesty for financial crimes of the past, after a truth and reconciliation commission conducts a thorough investigation to expose the crimes committed rather than the criminals. A fresh start would then be made via an independent investment board—preferably of international stature and composition—to oversee and actually award all state contracts. In order to satisfy international donors, the state could simply demonstrate their commitment to a clean start with one major infrastructure project. For example, this could be the rebuilding of the electric grid of Lebanon, which an international board could verify as fairly executed under the new system. Contracts for other major services would follow, starting with the proper collection and treatment of garbage.

If revolution requires leadership and unity behind a common strategy, reform from above also requires vision and strategy on the part of a leader or a leading party that must then convince other parties to support the measures needed to implement reform. To that end, pressure from the street is as instrumental as pressure from the international community. The would-be reformer must be convinced that holding on to power is conditional upon carrying out the needed reforms. The ingredients for this approach to Lebanese reform are there. However, it remains a cause that awaits the right champion.

Nabeel Khoury is a nonresident senior fellow at the Atlantic Council’s Rafik Hariri Center for the Middle East.

Ammonium nitrate didn’t belong to Hezbollah, but they knew about its dangers

Hezbollah is acutely aware of the danger that such chemicals—even if not of a military grade—pose to nearby civilians, perhaps more so than any other entity in Lebanon. 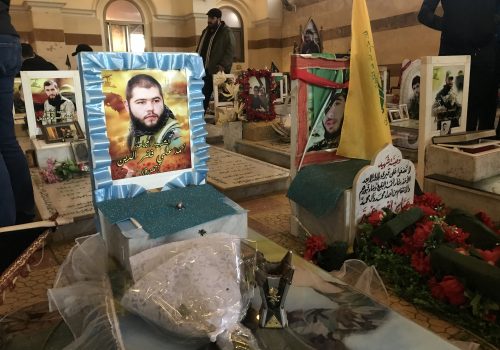 Amidst the pandemic, Hezbollah buries fighters killed in Syria

Multiple additional combatant deaths have been reported by media outlets close to Hezbollah since the COVID-19 lockdown, pointing to its continued engagement in military combat and training activities. 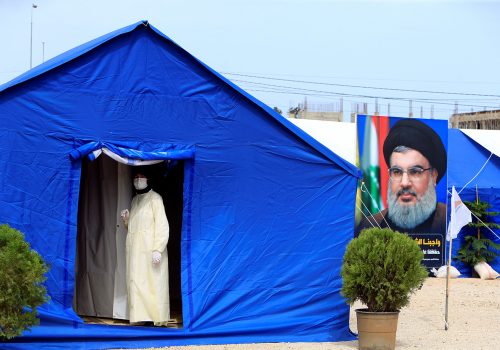 Hezbollah has been working for years on integrating itself into the Lebanese state. Now that the country is falling apart, Hezbollah’s assimilation into the state apparatus, which was initially meant to protect the organization against international pressure, could pose a direct threat to the group’s future.