The Killing Machine of Erdogan on the Loose!

(CNN)Turkey has launched a planned military offensive into northeastern Syria, President Recep Tayyip Erdogan announced Wednesday, just days after the Trump administration announced it was pulling US troops back from the border area.

«Our aim is to destroy the terror corridor which is trying to be established on our southern border and to bring peace and peace to the region,» Erdogan tweeted.
He added that Turkey «will preserve Syria’s territorial integrity and liberate local communities from terrorists.» 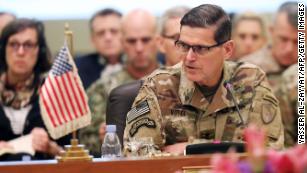 Former top US general in Middle East slams Trump’s Syria decision
Shortly after Erdogan announced the offensive, the spokesman for the Kurdish-led Syrian Democratic Forces (SDF) — a key US ally in northern Syria — claimed that warplanes had begun carrying out airstrikes on civilian areas. «There is huge panic among people in the region,» spokesman Mustafa Bali wrote.
A US official familiar with operations in Syria confirmed that Turkey conducted strikes in Tal Abyad in northern Syria and the border town of Ras al-Ayn.
Witnesses and two fighters for the Kurdish People’s Protection Units (YPG) told CNN that hundreds of civilians in northern Syria had fled areas on the border with Turkey. The fighters also said Turkey had used heavy artillery and conducted airstrikes on Ras al-Ayn. 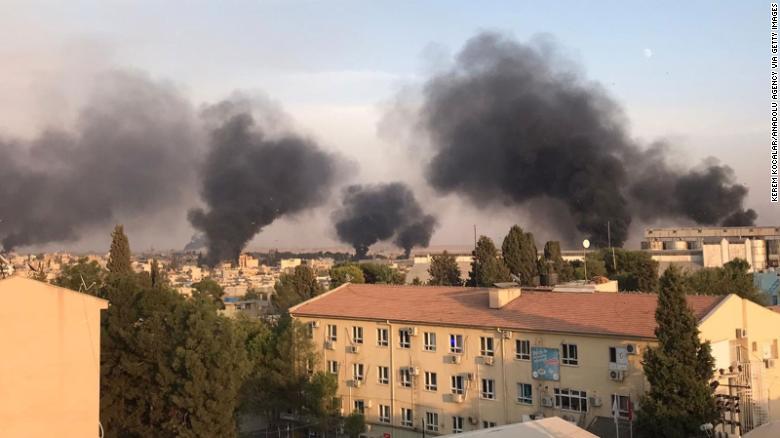 A photo taken from Turkey’s Sanliurfa province shows smoke rising at the site of Ras al-Ain.
The offensive comes days after US President Donald Trump provoked a storm of criticism, including from his own party, by announcing the pullback of US military forces from the region. Trump’s decision in effect gave Turkey a green light to attack US-backed Kurdish forces, though Trump threatened to punish Turkey economically if it does «anything outside of what we think is humane.»
Ankara regards the YPG as a terrorist group affiliated with the Kurdistan Workers» Party (PKK), which has fought the Turkish state for more than three decades. But the US backs the YPG and credits the Kurds for helping defeat ISIS in Syria. 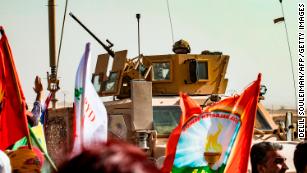 Everything you need to know about Trump’s plan to pull back from Syria
In a tweet early Wednesday, the Turkish government communications director, Fahrettin Altun, said the YPG had two options: «They can defect or we will have stop them from disrupting our counter-ISIS efforts.»
Turkey’s Minister of National Defense, Hulusi Akar, tweeted that the United States, United Nations and NATO, among others, had been informed of the operation at 7 a.m. ET.
Ahead of the offensive Wednesday, Syria condemned Turkey’s «aggressive behavior» and «hostile intentions,» according to Syrian state news agency SANA. «The aggressive behavior of the Erdogan regime clearly shows the Turkish expansionist ambitions in the territory of the Syrian Arab Republic and cannot be justified under any pretext,» a source at the Foreign Ministry said, SANA reported.
A source at the Foreign Ministry said in a statement Wednesday that the Syrian government holds some Kurds responsible for what is happening «as a result of their dependence on the American project.»
Meanwhile, Russian President Vladimir Putin asked Erdogan to «carefully weigh the situation» in Syria, so as not to «harm the overall efforts to resolve» the crisis, according to a statement released by the Kremlin.
In the statement, the Kremlin also underlined «the importance of ensuring the unity and territorial integrity of Syria and respect for its sovereignty was noted on both sides.»

The Kurdish-led Syrian Democratic Forces (SDF) called on on the international community Tuesday to help avoid a possible humanitarian disaster.
In series of tweets from the verified Twitter account of the SDF, the General Command said the border areas of northeast Syria «are on the edge of a possible humanitarian catastrophe.» It went on to call on the international community and those countries fighting against ISIS «to carry out their responsibilities» to avoid a «possible impending humanitarian disaster.»
The SDF, which has vowed to defend itself against any perceived Turkish incursion, called on the US-led coalition and the international community to implement a no-fly zone over northern Syria similar to the one implemented in Iraq.
The Turkish Defense Ministry said Tuesday that the Turkish Armed Forces is «the only coalition and NATO army fighting the DAESH (ISIS) terrorist group in the Euphrates Shield Operation.»
«Turkey is one of the countries most affected by DAESH’s bloody activities and has fought against this terrorist organization both domestically and beyond its borders with increasing tempo and intensity,» the ministry said in a tweet posted on its official twitter page.
The Euphrates Shield Operation, launched in July 2014 inside Syrian territory, was not only aimed at fighting ISIS but also the YPG.
On Wednesday, the SDF said ISIS «sleeper cells» attacked Kurdish positions in Raqqa, Syria, in the early hours, as tweeted by Mustafa Bali, head of the SDF press office.
Manbij Military Council spokesman, Shervan Derwish, also tweeted about the attack citing security sources saying, «more than 50 armed Daesh group in Raqqa are launching a coordinated attack to control Al Basel base in center of the city.»
On Saturday, Erdogan announced that the country had «completed our preparations and action plan» and was ready to launch a «ground and air operation» east of the Euphrates river, with the goal of establishing «peace» by clearing the region of «terrorists.»
Reinforcements deployed by the Turkish army could be seen arriving at the border town of Akcakale on Tuesday, according to the state-owned Anadolu news agency. 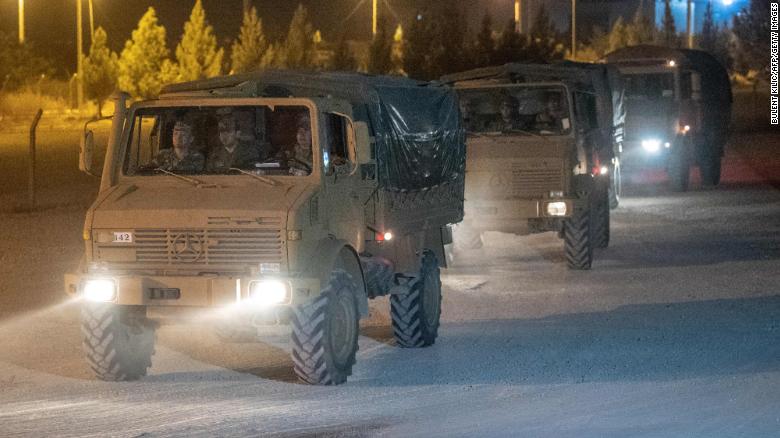 Turkish army soldiers drive towards the border with Syria near Akcakale in Sanliurfa province on October 8, 2019.
The Kurds have long been considered as among Washington’s most reliable partners in Syria and in the broader campaign against ISIS in the region.
US-backed Kurdish forces have been responsible for holding all captured ISIS fighters in the area. However, according to the White House, this responsibility will now fall to Turkey.
Trump has defended his decision to remove US troops from the area, saying he was «not siding with anybody» — Kurdish forces or the Turkish government — and reiterated an earlier warning to Turkey about potential economic devastation.
«I told Turkey if they do anything outside of what we think is humane … they could suffer the wrath of an extremely decimated economy,» the President said.
Turkish Vice President Fuat Oktay said his country won’t «bow to threats» in an apparent response to Trump’s warning.
«Turkey will teach a lesson to terror organizations that threatens our southern border and we will give an opportunity for Syrian refugees who are currently in Turkey,» Oktay said. «Our message to international community is clear. Turkey is not a country that will bow to threats.»