The Truth About US Sadistic Policies on Venezuela

The Grayzone obtained a list of «key outcomes» on Venezuela deleted out of apparent embarrassment by the State Department. It boasts of wrecking the nation’s economy, destabilizing its military, and puppeteering its political opposition.

By Anya Parampil – The Grayzone – May 6th 2019 – venezuelanalysis.com 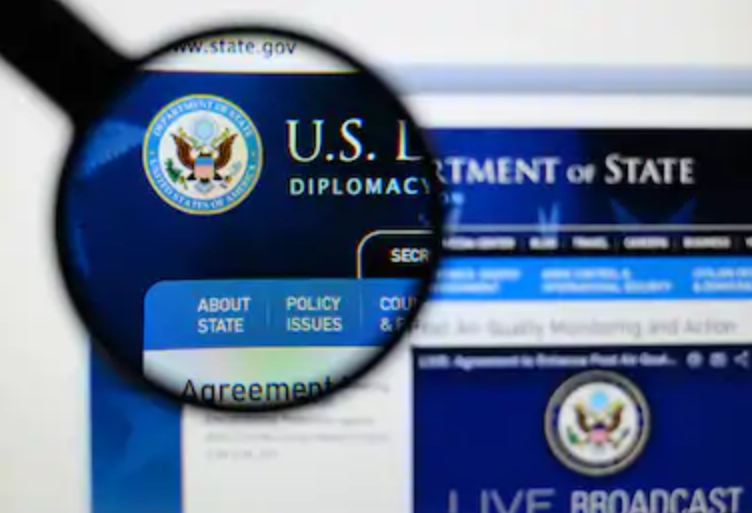 US State Department under the magnifying glass. (Archive)

On April 24, six days before self-proclaimed Venezuelan “interim president” Juan Guaido’s attempt to violently overthrow Venezuela’s democratically elected government alongside a handful of military defectors, the U.S. State Department published a fact sheet that boasted of Washington’s central role in the ongoing coup attempt. After realizing the incriminating nature of its error, the State Department quickly acted to remove the page.

The Grayzone has obtained a full copy of the expunged report. The deleted page puts to bed any claims of Guaido’s independence from Washington, as the State Department emphasizes the fact that he “announced his interim presidency… in January” at the the top of a section dedicated to breaking down “key outcomes” of U.S. efforts with regard to Venezuela.

U.S. Assistant Secretary of State for Western Hemisphere Affairs Kimberly Breier recently took to Twitter to claim that “since he became acting president, Juan Guaido has given tangible results to the people of Venezuela.” Her tweet was accompanied with an infographic detailing alleged accomplishments of the powerless coup administration based on data compiled by the legally defunct National Assembly, the only governing body actually controlled by Guaido.

But the Venezuela fact sheet posted and then deleted days earlier by the State Department told a dramatically different story.

Entitled “U.S. Actions on Venezuela,” the document boasted that U.S. policy had effectively prevented the Venezuelan government from participating in the international market and has led to the freezing of its overseas assets. It read like a sadistic celebration of Washington’s retribution against the Venezuelan population as a whole, the kind of collective punishment which is illegal according to Article 33 of the Geneva Conventions.

The State Department gloated in the deleted fact sheet that its policy had ensured that the Maduro government “cannot rely on the U.S. financial system” to conduct business, noting “key outcomes” of U.S. actions include the fact that “roughly $3.2 billion of Venezuela’s overseas are frozen.” It went on to boast that “Venezuela’s oil production fell to 736,000 barrels per day in March… substantially reducing” government revenue.

“If I were the State Department I wouldn’t brag about causing a cut in oil production to 763,000 barrels per day — which is a 36 percent drop, in just the two months of February and March this year,” Mark Weisbrot, Co-Director at the Center For Economic and Policy Research, told The Grayzone. “This means even more premature deaths than the tens of thousands that resulted from sanctions last year.”

Weisbrot recently co-authored a bracing report which found that 40,000 Venezuelans died between 2017 and 2018 as a direct result of U.S. sanctions. The State Department patted itself on the back for announcing its preparedness “to provide an additional $20 million in initial humanitarian assistance” to Venezuela, however, the CEPR report concluded that Trump Administration sanctions implemented in August 2017 resulted in “a loss of $6 billion in oil revenue over the ensuing year” alone.

While the State Department praised the opposition for “providing medical and hygiene attention to over 6,000” Venezuelans, those numbers dwarf in comparison to the 300,000 people CEPR “estimated to be at risk because of lack of access to medicines or treatment… [including] 80,000 people with HIV who have not had antiretroviral treatment since 2017, 16,000 people who need dialysis, 16,000 people with cancer, and 4 million with diabetes and hypertension.”

In other words, the supposed “Venezuela Crisis Response Assistance” touted by the State Department is not even a band-aid over the gaping wound that US unilateral coercive measures have inflicted on the country.

In Weisbrot’s view, the “policy” and “outcomes” promoted by the State Department in the disappeared document will merely lead to “more cuts in imports of medicine, food, medical equipment, and inputs necessary to maintain water, health, and sanitation infrastructure.”

Having denied the Venezuelan government the ability to provide for its own population, the U.S. has essentially promised that thousands more deaths will occur.

The State Department did not respond to The Grayzone’s request for a comment on the fact sheet it deleted.

In a recent interview with The Grayzone, Venezuela’s ambassador to the United Nations Samuel Moncada characterized the deleted State Department fact sheet as “a list of confessions.”

The ambassador went on to accuse the U.S. of engaging in “bullying” rather than international diplomacy.

The State Department’s own fact sheet appears to support this accusation, as it asserts “diplomatic pressure resulted in fewer markets for Venezuelan gold.” The document further highlighted U.S. actions that have supposedly led “more than 1,000 members of the military [to recognize] Juan Guaido as interim President” and defect to Colombia, as well as stranding “an estimated 25 crude oil tankers with 12 million barrels” off Venezuela’s coast.

“They [say] it’s our ‘key’ achievements,” Moncada commented. “They are saying that they are causing trouble in our military and inducing a military coup, [which] so far they haven’t achieved, but they are working towards.”

“If any other person says that themselves,” the ambassador concluded, “and you take that confession to court, they would be in prison.”

The State Department’s fact sheet even frames recent decisions by the Organization of American States, Lima Group, Inter-American Development Bank, and European Union to either recognize or support Guaido’s shadow administration as a U.S. achievement, highlighting Washington’s outsized influence within each of these supposedly international governing bodies. The decision to mention the E.U. and Lima Group is particularly noteworthy considering the United States is not a member of either organization.

Anya Parampil is a Washington, DC based journalist. She previously hosted a daily progressive afternoon news program called In Question on RT America. She has produced and reported several documentaries, including on the ground reports from the Korean peninsula and Palestine. 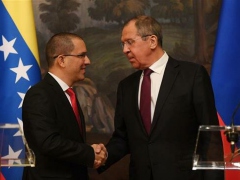 May 7th 2019
Venezuelan Foreign Minister Jorge Arreaza denounced US sanctions and asset freezes during a recent trip to Moscow. 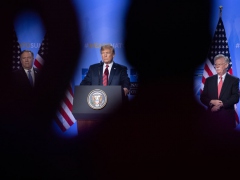 May 6th 2019
War hawks Bolton, Pompeo, and Abrams are attempting to illegally topple leftist governments across the region. 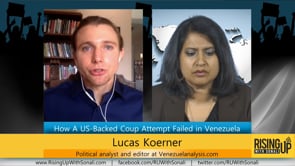 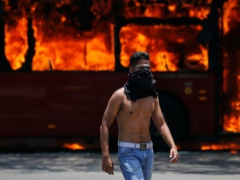 May 3rd 2019
Media side with Trump cronies rather than common sense in labeling coup a «protest.» 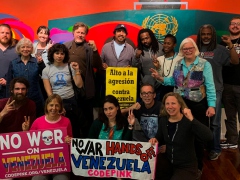 May 2nd 2019
The violence and bigotry of the opposition has made the embassy protectors even more resolute in their cause. They worry that should the opposition come to… 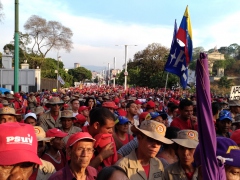