The Global North “left” critique of “authoritarianism” in Venezuela

Lucas Koerner warns that the Global North “left” critique of “authoritarianism” in Venezuela serves as ideological cover for the current coup and impending dirty war pushed by Washington. 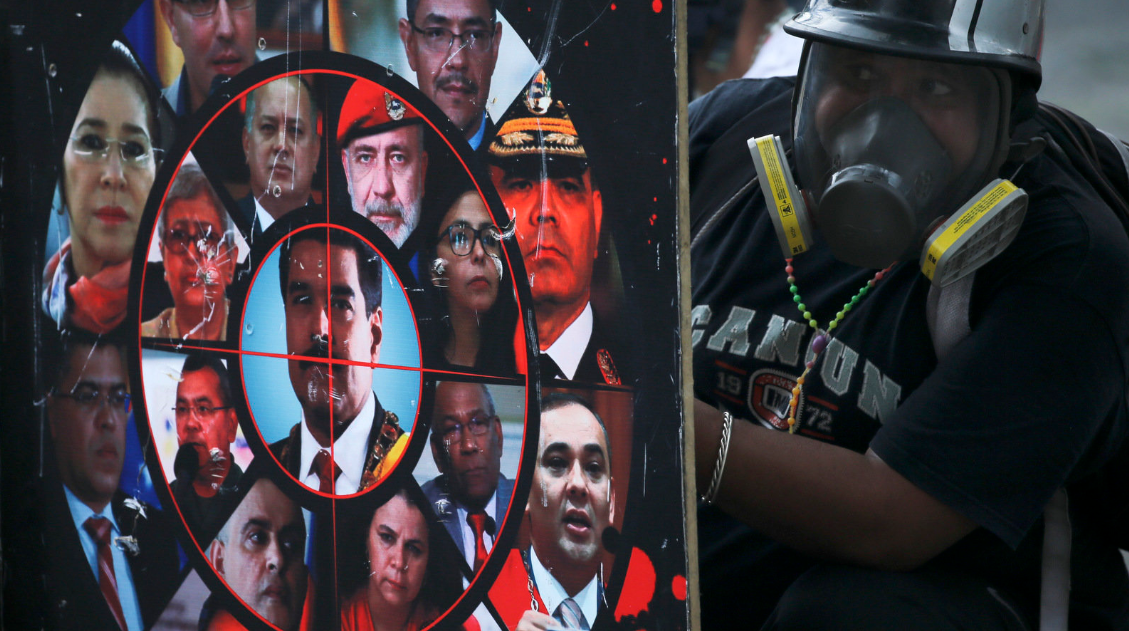 In a recentpiece for Jacobin, Gabriel Hetland mapped out what he believes should be the “left” position vis-à-vis theongoing US-led coup effort in Venezuela.

Hetland correctly observes that there is “absolutely no justification for U.S. sanctions or military intervention” in Venezuela, which must be opposed by leftists and progressives the world over.

However, he goes on to argue that President Nicolás Maduro “was not democratically elected,” and as such, the left has a duty to “back the call for free and fair elections” in the Caribbean nation.

But is Maduro any less legitimate than his Global North counterparts and should the US left be calling for new elections in Venezuela? Moreover, are “free and fair elections” even feasible under current conditions?

Hetland elaborates a laundry list of alleged “authoritarian” abuses by the Maduro government that he claims invalidate the Venezuelan government’s democratic credentials.

In a previousarticle, we argued that the political science concept of “authoritarianism” is fundamentally colonial in nature, serving to juxtapose Global North capitalist democracies with Global South “regimes” that challenge the Washington consensus of “free markets” plus liberal representative democracy as the “end of history.”

In discarding this ontological binary, we affirm that the Maduro government must be judged not according to some abstract ideal of “democratic legitimacy, “ but by the same standards we apply to the Trump administration and other Global North regimes.

He, of course, omits the critical fact that the three largest opposition parties, Democratic Action (AD), First Justice (PJ), and Popular Will (VP), hadboycotted the December 10, 2017 municipal elections, obliging themto re-validate their party status by collecting signatures from0.5 percent of the electorate – a requirementnot uncommon in many states of the US. AD successfullyrenewed its status, PJ failed to collect the necessary signatures, while VP boycotted the procedure outright.

Capriles was indeeddisqualified from running over Odebrecht corruption allegations that were likely politically motivated. Nevertheless, in any other country he would probably still be in jail, or legally barred from holding office, given his high-profile role in the 2002 coup, in which he led thesiege of the Cuban Embassy and participated in thekidnapping of Interior Minister Ramón Rodriguez Chacín together with former Chacao MayorLeopoldo López. Capriles and López, along with other prominent opposition leaders, including Julio Borges, Antonio Ledezma, and María Corina Machado, would go on to spearhead five more brazenly unconstitutional attempts to oust the Chavista government: the 2002/3 oil lockout, the 2013 post-election opposition violence, the 2014and 2017 guarimbas, as well as the current Trump-led coup.

While Hetland is correct to call into question the manner in which the Maduro government has engaged in top-down power maneuvers from the Supreme Court, National Executive, and later National Constituent Assembly in a clear departure from Chavez’s strategy of bottom-up mobilization to build a socialist hegemony, he fails to acknowledge that such measures came in response to a parliamentary coup effort. Recall that the opposition-held National Assembly effectively blocked the government from renegotiating the country’s sovereign debt, approved abjectlyunconstitutional laws such as aconstitutional amendment retroactively shortening the presidential term, and declared that Maduro had “abandoned his post,” just as has been claimed tojustify Juan Guaido’sself-swearing in as “interim president.”

Likewise, as Venezuelanalysis has amplydocumented, the ruling United Socialist Party of Venezuela (PSUV) has certainlyrepressed challengers to its left in several cases, but such practices pale in comparison to those regularly employed by the US Democratic Party which has yet to face any legal repercussions for itsrigging of the 2016 presidential primary in favor of Hillary Clinton.

The fact of the matter is that Nicolás Maduro was re-elected in an internationally monitored election with6.2 million votes, equivalent to 31 percent of the voting eligible population. In comparison, Barack Obama received31 percent in 2008 and28 percent in 2012, while Trump was elected with just26 percentin 2016, failing to win the popular vote. As such, in procedural democratic terms, Maduro is no less legitimate than Donald Trump, Spain’s un-elected Pedro Sánchez, political crisis-mired Theresa May, or countless other Western leaders, none of whom would be expected to tolerate a violent foreign-backed opposition.

Hetland is again right to note that had the opposition united behind opposition presidential candidate Henri Falcon, the ex-governor would have stood a very good chance of beating Maduro. But he neglects to mention that the main opposition parties instead abandoned talks with the government and followed Washington’s lead in activelysabotaging Falcon with the aim of delegitimizing the election and setting the stage for the present coup attempt.

In 1990, the Sandinistas were defeated in a presidential election, which only in an Orwellian parallel universe could be construed as “free and fair.”

A decade of US economic strangulation and paramilitary terrorism had decimated the Central American country, leaving Nicaraguans to vote “with a pistol pointed at their heads,” as Daniel Ortega famously put it.

At the time, even the so-called “doves” within the US policy establishment, as Chomsky meticulously documents, enthusiastically backed the Reagan administration’s criminal siege, with liberal press icon Hendrik Hertzberg voicing support for a “continuation of the embargo against Nicaragua if the Sandinistas won the election and the observer reports were less than favorable.”

Meanwhile, the US left was too debilitated to adequately oppose Washington’s terrorist war.

Any objective assessment of the situation would have concluded that Ortega was one hundred percent in his right to suspend the 1990 elections until the US ended support for the contras, lifted the economic blockade, and paid US $17 billion in World Court-ordered reparations owed to the country. Yet, due to the weakness of US domestic opposition, Ortega was forced to accept the Reagan administration’s bait-and-switch peace deal, in which Washington reneged on its promise to end the war in exchange for elections.

Venezuela is not Nicaragua, but the present situation isn’t all-together dissimilar.

Like in Nicaragua, Venezuela’s May 20, 2018 election was hardly “free and fair,” but not for the reasons Hetland expounds.

Washington’s interference in the election was extreme, putting to shame the current Russiagate allegations.

A US financial blockade, imposed first by President Barack Obama in 2015 and made de jure by Trump in 2017, has decimated Venezuela’s economy, exacerbating the damage done by key Maduro policy failures which Hetland is correct to mention. As a result, Venezuela was robbed of at least US $6 billion in lost oil export revenues in the twelve months after August 2017, equivalent to around six percent of GDP. Healthcare spending in Latin America, in comparison, averages seven percent of GDP.

On top of these illegal measures, Washington promoted an opposition boycott, going as far as tothreaten to sanction opposition presidential contender Falcon.

If last year’s presidential elections were in no way “free and fair” for the above reasons, what then makes Hetland think calling new elections will be any different?

The US further ratcheted up its sanctions in late January, imposing a de facto oil embargo which is estimated to cost Venezuelan coffers $11 billion in 2019. According to Torino Capital Chief Economist Francisco Rodriguez, the new measures will, on top of existing sanctions, cause Venezuela’s GDP to contract by twenty-six percent in 2019, destroying what is left of the country’s economy and killing many, many Venezuelans.

Moreover, in the unlikely event that Maduro or some other Chavista candidate manages to win a new election, there is little chance Washington and the right-wing opposition parties – whose unpopularity at 75 percent is on par with the ruling PSUV according to opposition-aligned pollster Datanalisis – will recognize the outcome. The opposition has cried fraud in virtually every major election over the past fifteen years, with the curious exception of the two that they won. For its part, the Obama administration was the only government in the world that refused to recognize Maduro’s April 14, 2013 election victory.

The reality the left must take deadly seriously is that the US, along with its ultra-right VP and PJ allies, are hell-bent on waging a dirty war to exterminate Chavismo as a mass political force. Skeptics need look no further than the appointment ofElliott Abrams, widely considered thegodfather of US-backed death squad regimes in 1980s Central America, as special envoy to Venezuela. Similarly, the Venezuelan opposition’s enthusiastic support for US-led economic sanctions and refusal to rule out foreign military intervention are glaring proof of its willingness to sacrifice countless Venezuelan lives in order to bring down Maduro and Chavismo. Lest we forget that this is the opposition that thought nothing of lynching black men in the streets for the crime of “looking Chavista” during itsviolent anti-government protests.

We seem to be witnessing the same playbook as the April 11, 2002 coup when the Venezuelan opposition, with a green light from Abrams, temporarily ousted democratically elected President Hugo Chávez and installed a dictatorship that dissolved the constitution and killed between fifty and sixty people in a 47-hour reign of terror.

Under the present conditions of US-led siege, the notion that “free and fair elections” could be convened and Chavismo could peacefully relinquish power without risking liquidation is, at best, delusional.

As such, the first and foremost duty of leftists in Global North countries is to oppose their own governments’ imperial interventionism in Venezuela.

Any leftist discourse excoriating the Maduro government for “authoritarianism” and demanding elections as a point of abstract principle only provides ideological cover for the ongoing coup, especially since the US left is still too anemic to oppose it in any effective manner.

As Chávez used to say, “sólo el pueblo salva al pueblo” (only the people can save the people). Venezuelans can and will determine their own destiny, but it’s up to leftists, progressives, and all self-identifying democrats in the “belly of the beast” to help them defeat the new “coalition of the willing” being assembled to topple yet another independent Global South government.

Lucas Koener is a political analyst and editor at Venezuelanalysis.com.

Source: The Global Left and the Danger of a Dirty War in Venezuela 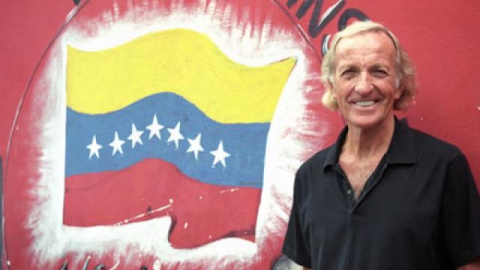 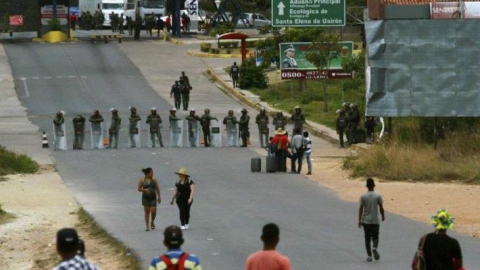