The Democratic Party and the so called «left» movement within

Is the left saving the Democratic Party?

In several primary elections, left-wing candidates have been showing up status-quo Democrats — and causing a panicked uproar. But how far will their challenge get? 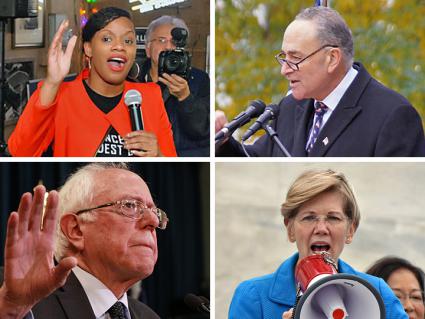 VICTORIES BY left-leaning candidates in local Democratic primary elections speak to the popularity of raising issues that ordinary people actually care about — rather than the corporate-friendly, controversy-avoiding messaging preached by the party establishment.

These successes have revived the discussions that began in earnest after Bernie Sanders’ popular campaign for the Democratic presidential nomination about whether the left can take over the Democratic Party and make it a vehicle for progressive politics. They persist despite the frictions and conflicts within Sanders’ post-2016 organization Our Revolution.

But even the touted first steps raise the question of what left-wing candidates can accomplish inside the Democrats, even if they win — and what they give up by connecting themselves to a party that has always been a guardian of the status quo and the interests of America’s ruling class.

THE SUCCESSES are significant in their own right.

In Pittsburgh-area Democratic primaries on May 16, for instance, many voters were happy to have the chance to support Democratic Socialists of America-endorsed candidates Summer Lee and Sara Innamorato, who each beat out better-known rivals by putting forward an agenda that included Medicare for all, free college tuition and a living wage.

But not everyone was happy.

The conservative National Review was frothing the day after Lee’s and Innamorato’s victories, with a story headlined: “Democrats Nominate Literal, Non-Metaphorical Socialists in Pennsylvania Primaries.”

As for the party establishment, it was sounding the alarm bell that if insurgents are allowed to dominate, the Democrats are doomed to fail in what should be an easy win in the midterm elections this November. The Washington Post warned in a headline, “The far left is winning the Democratic civil war.”

Despite polls that show the party’s base moving to the left, Democratic operatives have been on patrol against progressive primary challengers that threaten the anointed “centrist” candidates.

In some cases, they’ve waged smear campaigns against anyone other than their handpicked candidates — or tried to coerce the upstarts into pulling out. This was the case with Levi Tillemann, who became the focus of a pressure campaign by top House Democrat Steny Hoyer.

When Hoyer’s strong-arm tactics to force Tillemann out of a Colorado primary election were caught on tape and published by the Intercept, Hoyer stood by his aggressive meddling.

So did House Majority Leader Nancy Pelosi, who called the targeting of Tillemann “a conversation about the realities of life.”

As Pelosi lectured: “What’s important in all of this is that one in five children in America lives in poverty goes to sleep hungry. That’s what makes this election so urgent, for our children. So if the reality is that some candidates can get into the general [more] than others, then that’s a clear-eyes conversation.”

AND WHAT are party leaders like Pelosi offering as an alternative to the starry-eyed insurgents?

A few days after the Pennsylvania primaries, Senate Democrats put Pelosi’s “clear-eyes” politics on display — by casting the deciding votes to confirm Gina Haspel, the former head of a Bush-era torture program who belongs in jail, as the new director of the CIA. It wasn’t even close.

This is the Democratic apparatus’s idea of a November election strategy. Almost all of the Democrats who voted for Haspel are up for re-election in November in states that Trump won in 2016. So they rolled over and voted for the former overseer of a notorious CIA black site.

Senate Minority Leader Chuck Schumer voted against. But instead of leading fellow Democrats in confronting and exposing a torturer — or even publicly announcing his opposition before the vote — Schumer didn’t lift a finger to stop the nomination.

With three Republican senators opposed to Haspel’s nomination, the Democrats had the votes to stop her. But Schumer, Pelosi and Co. let their more conservative colleagues vote as they pleased, on the theory that this would win them points in their red states in November.

A lot of writers these days are asking what the true soul of the Democratic Party consists of, but the real question might be whether it has one at all.

IN THE mainstream media, the emergence of left-wing candidates in the primaries is portrayed as part of a battle between two different Democratic Parties.

On the one side, it’s the progressives, inspired by Sanders’ 2016 campaign, putting forward bold proposals around income inequality, health care justice and defense of the New Deal and Great Society social programs that the Democrats have been associated with since the 1930s.

On the other side is the party establishment, with a plan to steer the Democrats to victory in November by exploiting dissatisfaction with Trump among Democrats and Republicans alike. If the strategy is to win over alienated Republicans — and get the corporate backing needed to accomplish this — the progressives are only getting in the way.

But this picture misses the blur.

The question isn’t whether the Democratic Party is the party of activists door-knocking to promote the cause of Medicare for All or the party that makes cynical political calculations for the sake of winning over Republicans in November.

The two sides of the coin can’t be separated. And what’s more, the tails side of the door-knockers is inevitably affected by the heads side — but not the other way around.

During Sanders’ campaign for the presidential nomination, he offered voters with hopes and dreams of something better an alternative to business as usual. Sanders voters not only hated Trump and the Republicans, but they were fed up with a Democratic Party whose policies didn’t represent them — a party epitomized by one Hillary Clinton.

Many of these people were also ready for the socialist message that Sanders, to his credit, never hid during the campaign, despite the pressure.

But in the end, Sanders not only accepted defeat, but threw his support behind Clinton, whose apparatchiks had used the Democratic Party’s highly undemocratic rules to sabotage Sanders’ campaign. He was tougher than anyone else on supporters who couldn’t stomach the idea of supporting a presidential candidate they had fought so hard for so long.

THERE ARE plenty of examples of left-leaning candidates who challenged the Democratic Party’s mainstream orthodoxy.

Consider Dennis Kucinich, who ran for the Democratic presidential nomination in the 2000s as a progressive antiwar candidate. He opposed the Iraq War and the civil liberties-shredding USA Patriot Act, and his 2004 campaign seemed to pose an alternative to John Kerry’s middle-of-the-road bandwagon.

But when Kucinich lost, he folded up his challenge and likewise threw his disgruntled supporters behind a candidate they disliked.

Kucinich wasn’t ignorant of his mission: “The Democratic Party created third parties by running to the middle. What I’m trying to do is to go back to the big tent so that everyone who felt alienated could come back through my candidacy.”

Left-leaning candidates like Kucinich also help set the limits of what is considered the farthest left Democrats can go — and the party apparatus zealously guards that border, content in the knowledge that “leftists” like Kucinich won’t lead anyone across it.

Interestingly, Kucinich ran in the Democratic primary for governor of Ohio earlier this month, and was backed by Sanders’ Our Revolution. But he lost to Richard Cordray, who was supported by liberal Democrat Elizabeth Warren.

Sanders is different from Kucinich in one crucial respect. Because of his insistence on identifying as a socialist, many Sanders supporters saw his campaign as a platform for promoting socialist ideals. He is undoubtedly responsible for much of the surge of interest in socialist organization, particularly the Democratic Socialists of America. Kucinich can claim nothing remotely similar.

Over the past year and a half since Trump took power, people inspired by Sanders have generalized their knowledge and experience in many ways — through the Women’s Marches, immigrant rights struggles, the #MeToo campaign against sexual assault, a wave of teachers’ strikes.

We have to do everything we can to stop this development of a new socialist left from being exclusively bottled up in the November elections.

No doubt many people will view the elections as the next important step for the resistance that is beginning to be built. And we know from the Sanders’ campaign and the smaller-scale successes of openly left candidates so far this year that elections can shine a spotlight on left-wing ideas and proposals.

But we have to insist on the other lesson of the Sanders campaign — that remaining committed to the Democrats consigns the left to being locked up inside a two-party prison that is hostile to any challenge to the status quo.

This is a jail that is incredibly difficult to break out of at any time, because of the rigged rules of the “world’s greatest democracy.” But it is even harder to escape if the left renounces the principle of political independence and accepts the strategy of working from the inside of the Democratic Party.

The first step for socialists is to make this case about the elections and the Democratic Party, even if it is unpopular — while making every effort to engage a radicalizing audience in all the struggles and political opportunities that will take place between now and November 6.