THE IMPERIALIST BROTHERS – CREATES THE DANGER FOR HUMANITY!

Trump and Netanyahu drive toward war

People around the world are reacting with fear to the Trump administration announcement — fervently supported by Israeli Prime Minister Benjamin Netanyahu’s right-wing government and the Saudi regime of Crown Prince Mohammad bin Salman — that the U.S. will pull out of the nuclear agreement with Iran negotiated by Trump’s predecessor Barack Obama.

In an article published at the Alliance of Middle Eastern Socialists website Frieda Afary, an Iranian-American librarian and translator, and member of the Alliance, looks at the terrifying consequences of the Trump-Netanyahu war drive, both now and in the future. 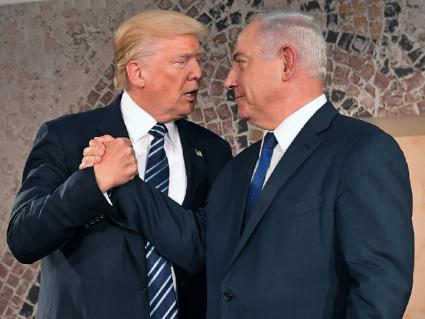 DONALD TRUMP’S announcement on May 8 that the U.S. is withdrawing from the Joint Comprehensive Plan of Action, as the nuclear agreement with Iran is officially called, was not a surprise. However, the full range of its ominous ramifications, not only for Iran, but also the Middle East region and the world, remain to be seen.

Trump and Netanyahu have claimed that the Iranian government had violated the terms of the 2015 nuclear agreement by holding on to secret plans for developing nuclear weapons, by promoting a ballistic missile program, and by its military intervention in Syria, Yemen, Lebanon and Iraq. While the nuclear agreement did not include the latter two points, it had successfully imposed a limit on Iran’s nuclear capabilities and a verification program to which Iran had abided, according to the International Atomic Energy Agency, the United Nations and the other signatories of the nuclear deal (Germany, Britain, France, Russia and China).

The U.S. withdrawal from the nuclear deal and the imposition of further sanctions on Iran will punish not only Iran, but all banks that do business with Iran’s Central Bank and all companies that do business with Iran. These companies will have 90 to 180 days to wind down their operations in Iran, or they will run afoul of the U.S. banking system. The sanctions on oil will require European and Asian countries to reduce their imports from Iran.

For now, Britain, Germany and France have declared that their countries and the European Union as a whole will stay committed to the nuclear deal, but will also try to work out a broader agreement with Iran on the issue of its ballistic missile development and military interventions in the region. Iran’s government has also announced that it will stay committed to the nuclear deal if Europe, China and Russia abide by it.

Israel and Saudi Arabia have enthusiastically supported Trump’s decision. Within an hour of Trump’s announcement, Israel launched another missile attack on a Syrian base used by Iran. Iran responded by firing missiles at Israeli military outposts in the Golan Heights. Israel then notified Russia before responding with air attacks on 50 Iranian military and security installations in Syria. A direct war between Israel and Iran has already started.

Iran is still the second-largest Middle Eastern economy after Turkey and a government with a degree of regional imperialist involvement that rivals Saudi Arabia (the third-largest economy in the Middle East.) While the Islamic Republic’s opposition to Western imperialism and Israel had given it much appeal among both Shi’a and Sunni Muslims for much of its existence, Iran’s military intervention in Syria in support of Bashar al-Assad’s murderous regime has taken away much of that appeal. This intervention and other interventions in Lebanon and Iraq have also bankrupted Iran economically.

Iran’s recent alliance with Turkey in competition with Saudi Arabia and Saudi Arabia’s new ally, Israel, once again shows that the power struggle within the region transcends the Shi’a-Sunni divide and now even the Muslim-Jewish divide. It involves a struggle for control over capital and strategic geopolitical influence in the region and is not limited to exporting Shi’a Islamic fundamentalist ideology.

The current bankruptcy of Iran and the growing Iranian popular opposition against the Islamic Republic, however, have created a situation which Saudi Arabia and Israel find opportune for getting rid of the Iranian regime.

It is in this context that the Trump administration has announced the U.S. withdrawal from the 2015 nuclear agreement negotiated by the Obama administration.

The current position of the U.S. however, not only puts it at odds with its former European allies, but can actually strengthen its global imperialist rivals, Russia and China.

In the words of Susan Rice, the national security adviser during President Barack Obama’s second term: «The costs to American global leadership are steep. When the United States unilaterally abrogates an international agreement in the absence of any breach, we undermine international perceptions of our reliability and responsibility. That is precisely what we have already done with the Paris climate agreement and the Trans-Pacific Partnership. But violating the Iran deal is far more dangerous.» (New York Times, May 9, 2018)

China which is one of Iran’s main trade partners and its largest provider of imported goods would continue to purchase Iranian oil and pay with goods and construction projects. Russia, which sells arms to Iran and is involved in oil and gas facility and nuclear power plant construction in Iran, has already announced that the U.S. withdrawal from the nuclear deal will actually help Russia. In the words of Vladimir Yermakov, a high-ranking representative of the Russian Ministry of Foreign Affairs: «The U.S. withdrawal will help us economically because there will no longer be limitations on economic cooperation with Iran. We will continue our bilateral relations in all fields, including energy, transportation, high technology.» (وزارت خارجه روسیه: با خروج آمریکا از برجام روابطمان را با ایران گسترش می دهیم. زمانه 14 اردیبهشت 1394 )

Those who will suffer the most will be the Iranian popular masses. Not only will they face even more backbreaking sanctions. Iranians now face the strong possibility of a direct war on Iranian soil launched by Israel, Saudi Arabia and the U.S.

Just at a time when a wave of labor protests and strikes has spread throughout the country following the December and January mass protests which called for the overthrow of the Islamic Republic and an end to its intervention in Syria and Lebanon, the sanctions and a possible direct war will have deadly effects. They will allow the regime to label any genuine progressive or revolutionary opposition as an expression of support for the U.S., Israel and Saudi Arabia. It will also strengthen nationalist sentiments to rally forces behind the regime. Young people who are now protesting in the streets will be conscripted as soldiers.

Even if the regime is not able to rally enough forces behind itself to legitimize itself, war and imperialist intervention will make it extremely difficult for progressive and revolutionary forces.

In the midst of the war sirens, it is the plea of a woman labor leader, Parvin Mohammadi, that progressives and socialists around the world need to publicize:

The Iranian government has a large budget and immense assets…The most important part consists of large funds given to military and religious institutions inside the country and war expenditures in Syria, Lebanon, for Hamas, Yemen, etc. This is not to mention billions stolen and embezzled…A government that responds to hungry workers with anti-riot guards, repression, imprisonment and expulsion has only one message. Its message is that it has no solution for resolving the problems and economic dead end and wretchedness that workers face…The task we face is addressing the lost lives of millions of working-class households and offering them welfare, health care, housing, education, in one word, a life worthy of a human being in the 21st century. (http://ettehad-e.com)

Those who are opposed to U.S. imperialism and all global and regional imperialist forces, need to express their support for progressive and revolutionary forces that are speaking out within Iran’s labor, feminist, student and intellectual opposition movement.

First published at the Alliance of Middle East Socialists website.