AND HERE IS THE UPCOMING WAR CRIMINALS – TRUMP AND HIS WARLORDS POMPEO AND BOLTON!

Trump moves Iran back into the crosshairs

Emma Wilde Botta explains what’s at stake with Trump’s latest effort to «break the regime» in Iran–by renouncing the nuclear deal negotiated by his predecessor. 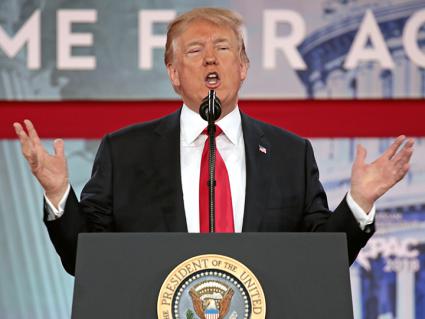 DONALD TRUMP’S announcement that the U.S. will withdraw from the 2015 nuclear deal with Iran and reimpose economic sanctions will intensify geopolitical conflicts in the region and threatens to spark a wider war, engulfing the region and possibly the world.

In a press conference yesterday, Trump called the 2015 nuclear deal «defective at its core.» He cited as evidence Iranian intelligence documents released by Israel on April 30.

In a presentation of the files last week, Israeli Prime Minister Benjamin Netanyahu claimed they conclusively prove that Iran continued pursuing a nuclear weapons program despite the 2015 agreement negotiated with the Obama administration, along with five other governments.

But according to the November 2017 report of the International Atomic Energy Agency (IAEA), which is tasked with monitoring Iran’s compliance with the deal, there are no indications that Iran has violated the agreement.

In fact, Netanyahu’s «evidence» dealt with Iran’s past nuclear efforts and contained no allegation that Iran is currently producing nuclear weapons or is otherwise in violation of the 2015 agreement.

Actually, the U.S. will become the only country that failed to uphold the terms of the 2015 deal, thanks to Trump’s decision to reimpose economic sanctions that have plunged millions of Iranians into economic hardship. The Trump administration’s aim appears to be, according to a senior European diplomat, to «break the regime» by means of economic strangulation.

Immediately following Trump’s announcement, Iranian President Hassan Rouhani responded that Iran would, for now, stay party to the deal with the remaining countries that had signed it. However, if other countries back out of the agreement, Iran is preparing to restart industrial enrichment of uranium.

Most U.S. allies are upset with Trump’s decision. France’s President Emmanuel Macron tweeted, «France, Germany and the UK regret the U.S. decision to leave the JCPOA [Joint Comprehensive Plan of Action]. The nuclear non-proliferation regime is at stake.»

Within Iran, hardline critics of efforts at negotiation will use Trump’s dissolution of the deal to portray Rouhani as weak and naïve in his dealings with the U.S.–and they will blame him for the worsening economic situation that is sure to follow.

THE 2015 nuclear deal was negotiated between Iran and the United Nations Security Council’s five permanent members–the U.S., Britain, China, France and Russia–along with Germany, referred to as the P5+1.

After years of talks, Iran agreed to a 98 percent reduction of its enriched uranium stockpile and a 15-year pause on developing weapons infrastructure. In return, most of the crippling economic sanctions against Iran were lifted, allowing the country to reintegrate into the global economy, including exporting oil.

The deal marked a decisive shift in U.S. strategy towards Iran. As Ashley Smith described for the International Socialist Review, U.S. predominance as the world’s sole superpower began to break down by the end of the neoliberal boom of the 1980s through 2008. In the new «asymmetric, multipolar world order,» the U.S. and global competitor China contended for power in Asia, while regional rivals such as Russia and Iran attempted to expand their influence, particularly in areas where the U.S. empire’s grip had loosened.

A series of military defeats hindered U.S. efforts to establish the desired order in the Middle East, a geopolitically vital region given its vast energy resources. The Bush administration intended to follow a successful invasion of Iraq with regime change in Iran and Syria. However, Iraqi resistance to U.S. occupation forced a change of plans.

Then, in 2011, the Arab Spring uprisings destabilized a series of regimes across North Africa and the Middle East, throwing another wrench in Washington’s plans.

The U.S. government claimed to support the popular uprisings in Tunisia and Egypt while assisting Bahrain in crushing its resistance. A disastrous NATO intervention in Libya ended in embarrassment as the U.S. ambassador was dragged out of the embassy and killed. This experience further moved the U.S. away from the Bush administration policy of regime change and toward a policy of regime stabilization.

The U.S. negotiated the 2015 nuclear deal from a position of relative imperial decline and in the context of these developments in the Middle East and North Africa.

With regime change in Iran off the table after the Bush administration’s disastrous Iraq invasion, the U.S. had to move from hostile isolation to cautious rapprochement with Iran. The Obama administration settled for a deal that essentially granted unfettered access to inspect Iran’s facilities–and that provided a pretext for pre-emptive strikes should a hint of noncompliance, verified or otherwise, surface.

At the time, the nuclear deal was condemned by hawks and right-wingers as a capitulation. Many on the antiwar left, by contrast, hailed it as a step towards peace. In reality, the deal was a diplomatic expression of the interests of U.S. imperialism, which variously employs diplomatic niceties or war based on the needs of the moment.

Though the means may differ, the end goals are the same. The U.S. aims to control the flow of Middle East oil, placate its ally Israel, curb Iran’s growing influence in the region and protect its monopoly on nuclear weapons for itself and its allies.

IN THE past decade, Iran has emerged as a regional power. U.S. interventions in the Middle East inadvertently strengthened Iran by taking out Iraq’s Saddam Hussein and weakening the Taliban in Afghanistan, both rivals of the Iranian state.

Iran’s bloody military intervention in Syria to save the regime of Bashar al-Assad has cemented a mutually beneficial alliance. Iran is increasingly able to exercise influence across the «Shia crescent» that runs from Hezbollah in Lebanon, through Syria and Iraq, to Iran, and to its allies in Afghanistan and Yemen.

In response to these developments, Israel has attempted to contain Iran by engaging in an ongoing proxy war in Syria. And U.S. ally Saudi Arabia, in an effort to build a bloc of Sunni states to counter Iran’s influence, has likewise been engaged in proxy wars and political maneuvers–from Syria to Lebanon to Yemen–to contain Iran.

Both Israel and Saudi Arabia welcome Trump’s turn away from the strategy Obama had pursued, which sought to end sanctions on Iran in exchange for Iran’s acceptance of strict limits on its nuclear programs.

Meanwhile, even as proxy forces of the U.S. and Iran were on opposite sides in Syria, the two powers often worked together in Iraq to contain what both considered common enemies threatening Iraq’s federal government, which is aligned with Iran.

Ripping up the Iran deal could serve as a way to more tightly bind together the regimes of Trump, Israeli Prime Minister Benjamin Netanyahu and Saudi Crown Prince Mohammad bin Salman.

SINCE THE beginning of his presidency, Trump has embraced an aggressive «America First» nationalism and warmongering. He has staffed his cabinet with protectionists and hawks who call for confrontation with North Korea, Iran and China.

The U.S.’s unilateral withdrawal from the deal puts the U.S. at odds with European allies France, Britain and Germany. The nuclear deal is technically still in place–as long as the rest of the P5+1 countries don’t reimpose sanctions.

European companies will, however, have to end operations in Iran within 90 to 180 days or risk running afoul of U.S. sanctions, which bar companies and international banks that do business with Iran from access to U.S. markets and the U.S. banking system. The U.S. has set the lead, and European allies may be pressured to follow.

As the U.S. seeks to negotiate a nuclear deal with North Korea, it’s hard to predict the impact of Trump ripping up a similar deal with Iran.

North Korea’s Kim Jong-un may decide to push for additional concessions, figuring that he doesn’t have much to lose if the U.S. might just back out of a deal in a couple years. And some in Trump’s inner circle are apparently already worried that Trump’s eagerness to close a deal with North Korea could result in a less-than-ideal agreement–exactly what Trump said of Obama’s deal with Iran.

Trump’s turn from pursuing stabilization in the Middle East toward open hostility with Iran paves the way for greater conflict and chaos in the region. The major victors in this moment are U.S. warmongers, the Israeli-Saudi alliance and Iran’s hardliners.

Those most immediately imperiled are the Iranian people, who are faced with the reintroduction of economic sanctions that previously devastated the economy and left basic necessities in short supply.

But as a wave of anti-government protests and workers» strikes in Iran last December and January revealed, the people of Iran aren’t simply passive bystanders to the economic and political crises convulsing their society.

Trump accuses Iran of «meddling» throughout the region, but it’s the U.S. that has sent troops half a world away to fight in a number of conflicts that encircle Iran.

Trump’s decision to clear the path diplomatically for stepped-up economic war–with the potential for a military confrontation to follow–is the most dangerous threat to peace in the region and the world, as well as a clear violation of Iran’s sovereignty.