HERE’S THE BIGGEST WAR CRIMINALS ON PLANET EARTH – THE US GANG 4! 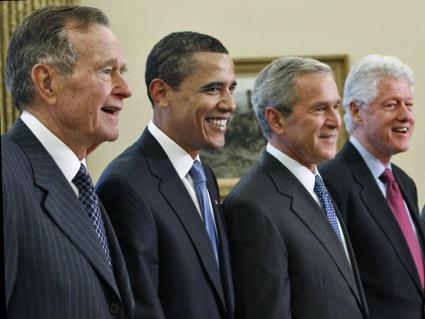 AFTER A yearlong chaotic faction fight in his administration, Trump has purged the White House of most of its establishment representatives and replaced them with advocates of his «America First» nationalism and militarism.

The new «cabinet of horrors» has thrown the establishment into a paroxysm of nostalgia for what they consider the sacrosanct assumptions of yesteryear–or at least 18 months ago.

A growing collection of mainstream commentators has denounced Trump’s protectionism, reckless threats of unilateral military action and transactional approach to both allies and antagonists. They have contrasted all this with previous administrations and their imperial policies, which tended to stress «stability» above all else.

In place of Trump’s assertion of naked American interests, they yearn for the «multilateralism» that served as the prevailing orthodoxy of American foreign policy in recent decades. While Trump throws their cherished assumptions out the window, the stewards of the foreign policy establishments–the former generals and intellectuals who staff think tanks and organize Pentagon study groups–look back on the recent past wistfully.

In the process, the horror with which many foreign policy commentators–not to mention millions of everyday people–regarded the perpetual wars of the last decade and a half is casually brushed aside as people struggle to keep up with the latest diplomatic outrages committed by Trump’s hatchet men and women.

EXAMPLES OF this retroactive rehabilitation are legion. The most recent was the transformation of Barbara Bush–the matriarch of a dynasty of corporate barons, corrupt politicians and war criminals–upon her death into a paragon of morality and even feminism. Organizers of the Women’s March bewilderingly wished her to «rest in peace and power.»

While she isn’t guilty of her husband’s and her offspring’s crimes against humanity, she cannot be excused from her own misdeeds–and they are plentiful.

For example, she plumbed the depths of racism when she said of Black victims of Hurricane Katrina huddled in New Orleans» Superdome: «So many of the people in the arena…were underprivileged anyway, so this is working very well for them.»

The matriarch’s halo was extended to her husband at the same time, despite revelations of his serial sexual harassment. The New York Times» house neocon, Brett Stephens, lamented the differences between Trump and George H.W. Bush, writing «the contrast between the 41st and 45th presidents comes to mind this week as millions of Americans mourn the passing of Barbara Bush and pray for the health of her bereaved husband. It’s a study in American decline.»

Bush Sr. may have been more competent and disciplined, at least in imperial policy, but his atrocities as head of the CIA and as president were far greater than anything Trump has committed during his first 18 months in the Oval Office. The worst of these–Bush’s slaughter of 200,000 Iraqis in the 1991 Gulf War–won him the moniker «the Butcher of Baghdad.»

Astonishingly, the previous holder of the title of worst warrior president ever, George W. Bush, has similarly benefited from this process of imperial retrofitting.

Well-known liberals, who in a past life once referred to him as «the global village idiot,» now praise him for denouncing Trump’s «racism and name calling»–absolving his massacre of more than 1 million Iraqis, his unleashing of the racist Department of Homeland Security on Arabs and Muslims, and overseeing the abandonment of Black New Orleans to Hurricane Katrina.

But perhaps the most ironic example of the establishment desperation for a return to empire as usual was their lavish praise of French President Emmanuel Macron for defending what had been previously known as the Washington consensus of free-trade globalization.

But Macron’s neoliberal policies can only get standing ovations from Republicans and Democrats in Congress. Back home in France, they provoke strikes and popular rejection, driving his approval ratings down below Trump’s, with a recent low of 35 percent.

AMID ALL of this imperial revisionism, an article by Jackson Diehl, a Washington Post foreign policy commentator and a supporter of the 2003 war on Iraq, stands alone. Titled «The Collapse of the U.S.-led World Order Has Done More Harm Than We Realize,» it excoriates Trump for abandoning Washington’s leadership of the world.

Diehl bemoans «how far-reaching and consequential the collapse of American-led order has been in the 15 months since Trump took office. In multiple miserable corners of the world, where U.S. envoys and aid would normally be helping victims, deterring malevolent actors and seeking political solutions, there is a void.»

With the U.S. abandoning the «White Man’s Burden» of being the imperial overlord, he fears chaos and regression in Latin America, Asia and Africa. In the Middle East, he warns that the beneficiaries will be «Russia, Iran, Hezbollah, Turkey and a host of jihadists who will haunt the region–and the West–long after the end of the Islamic State.»

In reality, American imperialism’s presence in these regions has been one of the principal reasons they suffer from chaos, dictatorship, oppression and inequality. Let’s take a counter-tour through the regions that Diehl itemizes in order to set the record straight.

While he denounces Trump for leaving a power vacuum in the Middle East, Diehl doesn’t enumerate what the U.S. has done in the region to benefit its people–and wisely so, because one cannot be made.

Here is Washington’s actual record there: It has backed the colonial settler state of Israel as its local cop, championed autocracies like Saudi Arabia, and opposed any and all popular struggles for liberation and equality, whether by Palestinians or the masses of people throughout the region. In the process, the U.S. helped to unleash the toxic sectarianism that plowed up the ground for ISIS.

Even worse, the very invasion that Diehl and The Washington Post wholeheartedly supported, the Iraq War, destroyed the country and destabilized the entire region. The Middle East is a case in point against the continued presence of American diplomats and soldiers; they are only deployed in the service of profit and empire.

HAVING REPRESSED these historical memories, Diehl’s first stop on his imperial nostalgia tour is Latin America.

After lamenting Trump’s failure to attend the recent Summit of the Americas and address the plight of Venezuela’s refugees, he boasts «for a century and more, Latin America and Caribbean countries in crisis could expect that the United States would intervene–for better or perhaps for worse–to break their fall.»

Now that’s a whopper. Truth be told, U.S. imperialism has been one of the main causes of crises in countries throughout the region. It backed dictators like Chile’s Augusto Pinochet, imposed neoliberal structural adjustment policies that impoverished workers, and positioned itself as the main agent of imperial counterrevolution against every liberation struggle from the Cuban Revolution to the Sandinistas.

In Venezuela, it has contributed to the crisis by imposing sanctions and repeatedly working to isolate and undermine Hugo Chavez’s popularly elected government. While his successor Nicolas Maduro has betrayed the masses» aspiration for socialism and democracy, the U.S. offers no solution but a return to the country’s predatory right wing.

Next stop: Africa. Diehl attacks Trump for abandoning «robust American stewardship across two administrations» over South Sudan. Again, the U.S. never pursued humanitarian aims in the continent. On the contrary, the U.S. and other Western powers have been solely motivated by plunder and imperial competition.

Remember, the U.S. was founded on a system of racist slavery, but its sins against Africa didn’t stop there. It has opposed every radical struggle for national liberation from European colonialism, assassinating leaders like Patrice Lumumba in the Congo, helping to overthrow Kwame Nkrumah in Ghana and supporting apartheid South Africa with its policy of «constructive engagement.»

Far from supporting humanitarian aims in South Sudan, the Obama administration that Diehl celebrates used such goals as an alibi, as Lee Wengraf explains, «to secure a friendly government in an oil-rich area.» In the process, the U.S. hoped to counter the increasing imperial weight of China across the continent.

Diehl ends his brief survey of Trump’s imperial retreat in Asia by attacking the administration for ignoring humanitarian crises in Myanmar and Tibet. Perhaps of all the regions of the world, however, the U.S. has the most tenuous basis for claiming any mantle of generosity in Asia.

It fought the Second World War to project its power into the region, dropped atomic bombs on Hiroshima and Nagasaki as a warning to Russia that it intended to rule Asia, and then proceeded to launch wars in Korea and Vietnam to enforce its dominion, massacring millions in the process.

It never cared about the oppression of Tibet beyond using it as bargaining chip in its relationship with Beijing, downplaying the question when American capital saw China as an invaluable place to subcontract manufacturing, and it will only re-raise the issue as the inter-imperial competition between the two powers heats up.

The Obama administration’s primary interest in Myanmar was never its people or their fight for democracy and equality. It hoped to use the symbolic leader of that struggle, Aung San Suu Kyi, to flip the country out of the orbit of China and into the American camp.

In the process, it tolerated Suu Kyi’s rapprochement with the country’s brutal military junta and her subsequent moves further and further to the right. And it never made an issue of the new regime’s oppression of the Rohingya ethnic and Muslim religious minority out of fear of driving Myanmar back into the Chinese sphere of influence.

THIS IS the real face of the «stewardship» that preceded Trump’s erratic America First nationalism. The imperial order that Diehl laments might have been more effective for American imperial dominance over the world system, but it was no less predatory and oppressive.

The policies of deregulation, privatization and free trade that the U.S. imposed at home and on most of the states of the world certainly enriched the capitalist classes, but it widened the gap between them and the world’s laboring majority and thrust whole swathes of the system into desperate poverty.

Ironically, Washington’s neoliberal program fueled the development of new imperial rivals to its domination of the world system, most importantly China. This has driven Thomas Friedman, the New York Times» prose-poet laureate of globalization, to support Trump’s turn to protectionism against Beijing.

Diehl’s article is nothing less than a call for the U.S. to return to the grand strategy of superintending the neoliberal world order. This is profoundly reactionary in two different ways.

First, it will of necessity bring the U.S. into increasing conflict with its international rivals like China, especially over Tibet and Taiwan, and regional ones like Russia and Iran, over Syria. Moreover, after 15 years of continuous war and occupation, Diehl’s call for more imperial intervention will only divert yet more money–something Trump is already doing–from needed domestic social and jobs programs into the war machine.

Second, the old grand strategy won’t stop the rise of far-right nationalists like Trump, but only further enlarge the base for such politics. Remember, it was the orange oligarch’s predecessors and their neoliberal policies that opened the door to Trump’s reactionary agenda.

In reality, you cannot defeat the far right by voting for the discredited establishment and its neoliberal politics. It offers only increasing inter-imperial rivalry internationally, and it will breed Trumpism domestically.

The way out of this toxic trap is to build the emerging new left in the U.S.–and throughout the world.

At home, the left must stand against the reactionary neoliberal center and its toxic far-right offspring, and abroad, it must build solidarity across borders with workers and oppressed people in a fight for immediate reforms on the road to turning the whole system on its head, so the needs of people come before corporate profits.