The Saudi-led coalition unleashed a barrage of air strikes on Yemen, slaughtering as many as 71 civilians (many of them children) within a period of 48 hours, reported the Qatar-based news network Al Jazeera on Christmas Eve. This massacre attained little attention and dissolved into history, forgotten. On the next day, December 26, the coalition targeted more sites, killing at least 68 men, women and children.

Those who are not annihilated by bombs risk dying from starvation. The Yemeni people are under blockade, enforced intentionally, with an aim to starve them into submission.

By definition a vicious war crime, it is not a newsworthy subject across the Western media sphere. Silence is particularly well kept at the U.S. news network MSNBC, found a study conducted by an investigative team of Fairness and Accuracy in Reporting (FAIR). The leading liberal channel did not air a “single segment devoted specifically to Yemen in the second half of 2017.”

Unfortunately, there is a reason for this. Serving increasingly as a mere agent of power, the media implies silence when it protects and justifies the interests of our mighty “masters of mankind”, to borrow the words of Adam Smith. Therefore, the crimes committed by the forces we label as our ‘adversaries’, are there to be amplified and condemned. Atrocities committed by us and our allies are there to be overlooked, ignored. Consequently, this conventional practice divides victims into worthy and unworthy. If this phenomenon was to be rated, then Yemenis would perhaps represent the most unworthy victims.

The country falls into this model perfectly. To begin with, the bombs that destroy its infrastructure and kill its men, women and children are manufactured by the military-industrial corporations, which are headquartered in countries such as Great Britain and the United States. Furthermore, they are dropped on Yemen’s targets under intelligence support of the mentioned powers, by their regional allies Saudi Arabia, the United Arab Emirates, Bahrain and Kuwait. These are the crimes of our empire and its client states, and therefore they would be forgiven and erased from the contemporary record.

However, after breaking conventional lies employed to justify the war, and after recovering the sources of what Vandana Shiva calls the “subjugated knowledge”, one will discover an inconceivable crime; perhaps the worst atrocity in decades being committed, precisely to propel the agenda of the most cynical forces controlling power.

It is past time to break the silence.

Our Ally in the Middle East

While the Saudi coalition has been bombing Yemen since 2015, not a word was uttered about its actions when American president Donald Trump visited Riyadh in May. It is forbidden to talk about human lives when a business that destroys them is booming. The Trump administration arrived in Riyadh to continue the legacy of its predecessors by signing a massive $109.7 billion arms contract with Washington’s corrupt and autocratic client state, promising high yields to the shareholders of America’s vast defense industry. Celebrating this contract, the business press published a piece with a headline stating: “Defense stocks at record highs on Trump-Saudi deal.”

It doesn’t matter that Saudi Arabia is a brutal theocratic and autocratic state, the single biggest sponsor of terrorism and a force waging an aggressive policy towards its neighbors in the Middle East.

In fact, Washington is well informed about it. An email released by WikiLeaks from the former Secretary of State, Hillary Clinton, reveals it very instructively. While elaborating on the U.S’s fight against ISIS in Syria and Iraq, Clinton points out that “we need to use our diplomatic and more traditional intelligence assets to bring pressure on the governments of Qatar and Saudi Arabia, which are providing clandestine financial and logistic support to ISIL and other radical Sunni groups in the region.” A nearly identical conclusion was drawn in a cable dating back to 2009. It assesses that “donors in Saudi Arabia constitute the most significant source of funding to Sunni terrorist groups worldwide.” Though we leave this note for now, the subject of terrorism will appear again. 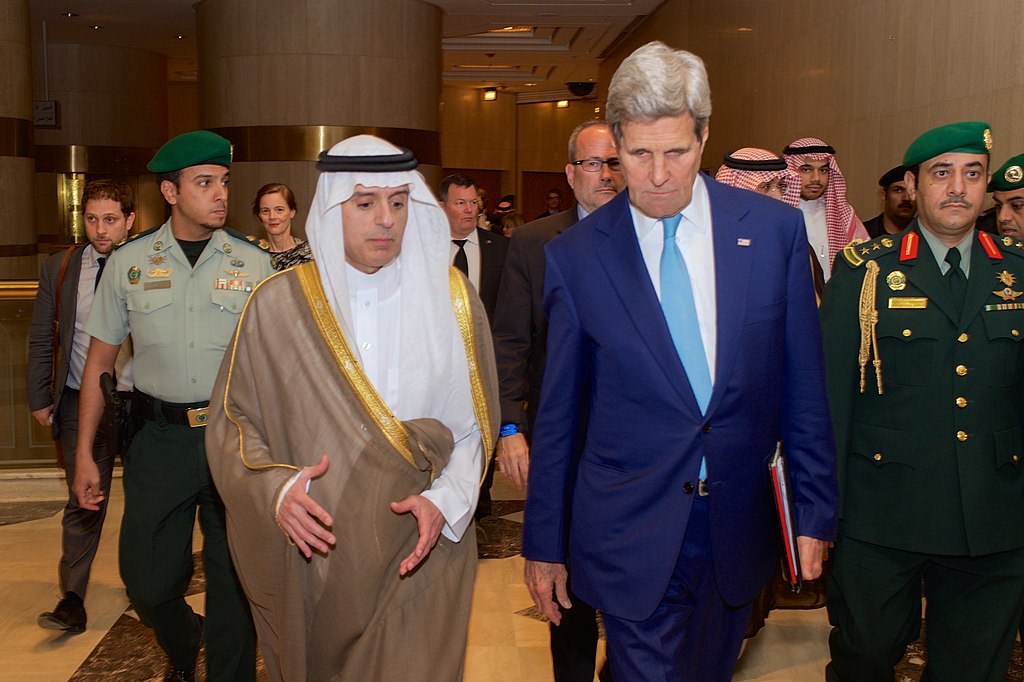 U.S. Secretary of State John Kerry walks with Adel Al-Jubeir, the newly named Saudi Foreign Minister, upon arriving at the Saudi Ministry of Interior in Riyadh, Saudi Arabia, on May 6, 2015, for a meeting and working dinner with Crown Prime Mohammed bin Nayef. (State Department photo)

Material support Saudi Arabia receives from Washington also signals a green light to its conduct in Yemen. It is worth stressing that the American empire plays an important role within the Saudi-led coalition. Adel al-Jubeir, the Minister of Foreign Affairs of Saudi Arabia, spoke openly about the partnership with the co-anchor of CBS, Norah O’Donnell. Replying to her softly-pressed concern about the coalition’s use of indiscriminate bombing, he replied:

“We are very careful in picking targets, we have very precise weapons, we work with our allies, including the United States on these targets.”

Supporting its client state in his political goals, the United States helps the coalition to identify “targets” in Yemen. This is an important point. Since Washington is so deeply involved in the war, it too bears responsibility for war crimes. Investigating further, we will discover the extent to which the interests of these two powers bond in Yemen, both before and during the current war.

The myth about Iranian Proxies

The reason that Saudi Arabia, along with its coalition partners, is waging war in Yemen has been repeated ever since the conflict started. Riyadh is fighting Houthis, a former guerrilla movement from the country’s Shia-populated Northern Province of Sa’ada. The Saudi intervention came months after Houthi rebels advanced from their Northern stronghold into the Central and Southern Provinces of Yemen, captured major cities, including the capital Sana’a. Abdrabbuh Mansur Hadi, at that time Yemen’s serving President, fled the capital in 2014 to the Southern port city of Aden, where he stayed until fleeing to Saudi Arabia. The coalition started bombing Yemen immediately after his exile in March 2015.

Straightaway, the goal of the bombing was stated clearly: Riyadh sought to restore the government apparatus of President Hadi in Sana’a and crush the Houthi uprising. Justifying its actions, the Saudi coalition blamed Iran for supporting the rebel movement and thus destabilizing the entire region. Therefore, the coalition intervened in Yemen to stop the spread of Iranian influence on the Arabian Peninsula. Obediently, the Western news media amplified this message. A proxy war scenario was born. On 26 March 2015, the Guardian summarized events in Yemen in the following fashion: “The conflict, spreading outwards like a poison cloud from the key southern battleground around Aden, pits Saudi Arabia, the leading Sunni Muslim power, plus what remains of Yemen’s government against northern-based Houthi rebels, who are covertly backed by Shia Muslim Iran.” Thus “the primary Saudi aim is to pacify Yemen, but its wider objective is to send a powerful message to Iran: stop meddling in Arab affairs.”

This narrative is still relevant today. Under a premise that Houthis are no more than proxies of Iran, it is possible to draw a conclusion that Riyadh responds reciprocally to Iran’s actions. Of course, such a narrative is grossly oversimplified, though it is repeated routinely in the corporate papers, and thus it has become a conventional wisdom. Before breaking down this myth, it is worth stressing that even if the conflict is portrayed as a regional fight between the two rivals – Riyadh and Tehran – the United States has numerously demonstrated its unilateral position on the issue.  Speaking at the Arab Islamic American Summit in Riyadh, President Trump made it clear that

“Iran funds, arms, and trains terrorists, militias, and other extremist groups that spread destruction” across Lebanon, Iraq and Yemen.

In this context, Iran’s destabilizing “extremist groups” in Yemen are the Houthis. Such a statement will not be a surprise for those who listened to the earlier remarks of the U.S. Secretary of Defense, James Mattis, who described Iran as “the single biggest state sponsor of terrorism in the world.” As we already know, this is a lie.

The nucleus of the argument that Iran is fighting a proxy war in Yemen stresses that Houthis receive their weapons from Tehran. Indeed, in order to see how much support Iran provides to Houthis, it is worth examining the U.S. diplomatic cables. Classified by the U.S. Ambassador to Yemen, Stephen Seche, a cable from 9 December 2009