STOP THE US WAR HAWKS AGAINST SYRIA! 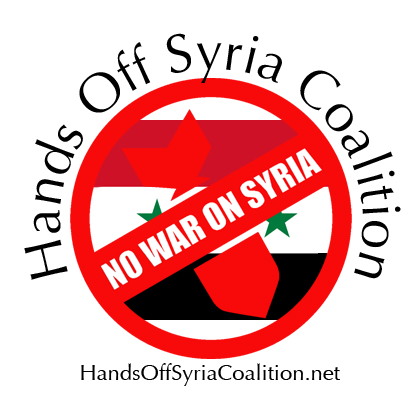 No War on Syria!
Defend the People of Syria!

Last night the U.S. military launched a massive air strike against Syria in violation of United Nations Charter, and without any authorization from the U.S. Congress. The pretext for the attack was the dubious allegation that the Syrian government was responsible for the chemical attack in Khan Sheikhoun.

This is a reckless and dangerous escalation on the part of Trump Administration, which can easily lead to a broader conflagration in the Middle East, direct military confrontation with Russia, and possibly even a nuclear war.

The Trump Administration is claiming that this air strike was a response to the Syrian government’s use of chemical weapons. There is no proof for such a claim. The reality is that the Syrian Arab Army, which is winning the war against ISIS and the U.S.-backed mercenaries, had nothing to gain and everything to lose from the use of chemical weapons.

The missiles launched against Syria last night alone have cost U.S. taxpayer another $70 million that could have been spent to alleviate the suffering of Syrian refugees, or to meet vital human needs in the United States.

It is time for people to take to streets to protest against this continuing madness and the waste of resources that result from it. We call upon all proponents of peace, justice, and people’s right to self-determination to urgently take action – mass demonstrations, vigils, teach-ins, calling the White House and the U.S. Congress – and demand that this mad drive toward war and destruction be immediately stopped.

It will take a massive, united effort by the peace-loving people of the world to stop US/NATO intervention in Syria and throughout the Middle East. Together we can do it.

Hands Off Syria!
U.S. Military Out of Syria and the Middle East!
Stop the U.S. War Machine!