The Islamophobics have Lost – so far

In the latest legal blow to President Donald Trump’s attempt to institute a controversial immigration and travel ban targeting seven predominantly Muslim nations, the Ninth Circuit Court of Appeals on Thursday unanimously sided with a lower court which earlier this week imposed an injunction against Trump’s executive order.

The ruling from the 9th Circuit, which followed a hearing on the case on Tuesday, does not resolve the lawsuit, but relates instead to whether Trump’s order should be suspended while litigation proceeds.

The government could ask the entire 9th Circuit court to review the decision «en banc» or appeal directly to the U.S. Supreme Court.

The three judges said the states had shown that even temporary reinstatement of the ban would cause harm.

Omar Jadwa, director of the Immigrants» Rights Project at the ACLU, which has also challenged the policy, welcomed the decision.

«The appeals court’s refusal to reinstate the Muslim ban is correct,» Jadwa said in a statement. «We will keep fighting this un-American executive order until it is permanently dismantled.»

Meanwhile, Sahil Kapur, national political reporter for Bloomberg, points out some key takeaways from the ruling:

Fascinating: 9th Circuit opinion uses President Trump’s own words about a Muslims ban against him. pic.twitter.com/nzfnHDTi34 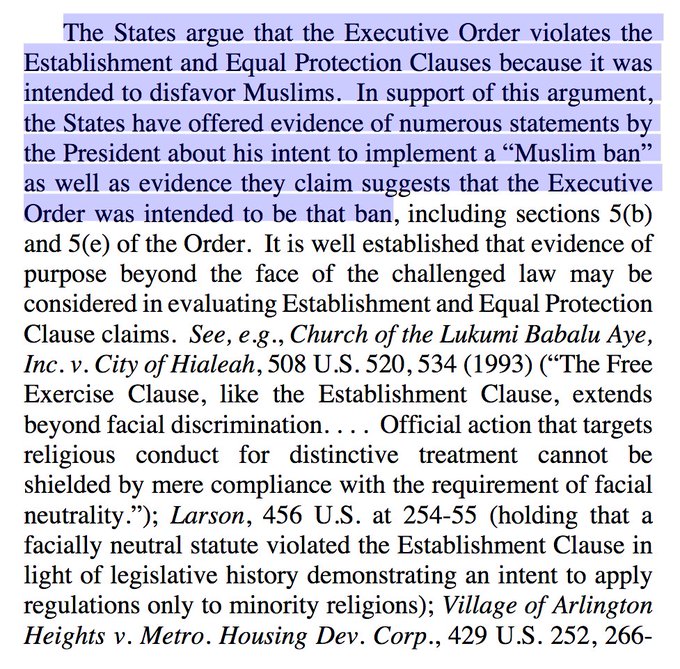