Fidel Castro Ruz is dead – The Revolutionary leader of Cuba

Get short URL – rt.com news
Fidel Castro © Desmond Boylan / Reuters
After years of dealing with failing health, Fidel Castro, leader of the Cuban revolution who steered the country through decades of a US economic blockade, has died, state media report. Fidel Castro

Castro died in Havana on Friday at 10:29pm local time, Cuban television said. His death was announced by his brother Raul, who took the reins after Fidel stepped down.

“According to the will expressed by comrade Fidel, his body will be cremated», Raul said.

Castro led the country from 1959 to 2006, when an intestinal condition nearly led to his death. He ceded power to his brother first provisionally, and then formally in 2008. In his last years, he mostly stayed out of the public eye, only occasionally providing commentary on events in Cuba. 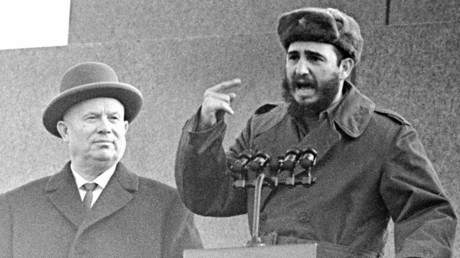 His passing marks the end of an era for many. Castro was the last remaining leader from the group of old school communist leaders including Chinese Mao Zedong, Korean Kim Il-sung and Soviets Nikita Khrushchev and Leonid Brezhnev.

Dictator or national hero, Castro was called many things along the way, as he rose from being a student activist protesting against oppressive regimes to becoming the president of Cuba.

In February 1959, the Cuban Revolution brought Castro to power as the prime minister. He was backed by the so-called 26th of July Movement, and Latin American revolutionary Che Guevara. Together, they managed to oust US-backed President Batista.

After failing to maintain ties with Washington, Cuba became isolated from its neighbor as the US chose to cut all trade links with the Caribbean state. In 1961, the island nation fended off a CIA-backed invasion known as the Bay of Pigs.

Upon taking office, Castro quickly found a new ally, as the Soviet Union supplied Cuba with arms, cars, and industrial equipment to keep it running.

But the nations’ alliance brought more than mutual benefits. Cuba and Russia became key players in the Cuban Missile Crisis – arguably the most dangerous confrontation of the Cold War, which almost ended in a nuclear show-down.

In October 1962, Castro agreed to house Soviet nuclear missiles on Cuban territory, a move that followed the deployment of US missiles in Turkey. Washington was furious over the development, and pledged to use force if necessary to prevent it. The countries’ leaders, Kennedy and Khrushchev, eventually agreed to a compromise.

The US government has always been open about its feelings toward communist Cuba. It remains unknown how many times the CIA tried to assassinate Castro, but some Cuban officials set the number as high as 600. This figure includes the notorious incident when Castro’s cigarettes were found to be stuffed with explosives.

Video clip on the assassination attemtps on Fidel Castro:

After passing power to his brother Raul, Fidel was still considered the main moral authority in Cuba. Occasionally, he also met with foreign dignitaries like Pope Francis in 2015 and Russian Orthodox Patriarch Kirill in February.

Under Raul’s leadership, Cuba has experienced a slow transformation as he has introduced some market-style economic reforms in the largely socialist country. He also agreed to restore diplomatic ties with the United States in December, taking a step away from decades of rivalry. Fidel was skeptical about the rapprochement, but did not oppose it.

The father of the Cuban Revolution remains unbeaten by his foes even in death. We look over the most dramatic assassination plots on El Comandante – from character-assassinations by way of LSD, to Italian mobsters, tuberculosis wetsuit, and exploding cigar.

“If surviving assassination attempts were an Olympic event, I would win the gold medal,” Castro is famously quoted as saying. Cuba’s ex-intelligence chief Fabian Escalante – the person tasked with guarding Fidel’s life – puts the number of attempts at 638. The man also claimed to Reuters in a 2010 interview that the John F. Kennedy assassination could well have been an attempt to expedite the process of removing Castro from power: the American president, some said, was not doing enough. Of course, by the time of Kennedy’s 1963 shooting death in Dallas, Texas, there had already been numerous attempts on Castro’s life – intended to bolster Kennedy’s own reputation back home as a strong president, with his administration exerting great pressure on the CIA to take care of it. It is fitting then to start at the beginning.

1) Getting the Mafia to do it

When a sizable cache of classified CIA documents, amicably called ‘Family Jewels,’ was finally released in 2007, Cuban communists felt a sense of vindication, finally gaining the ability to publicly accuse the United States government of what they claimed was already common knowledge.

In the summer of 1960, the CIA recruited former FBI agent Robert Maheu. He became the go-between from the agency to two prominent Italian gangsters on the FBI’s Ten Most Wanted List – Santo Trafficante of the Miami Syndicate, and Salvatore Giancana – Al Capone’s successor in Chicago. They were gotten hold of by way of Las Vegas mobster Johnny Roselli. A payment of $150,000 was on the table. According to the declassified documents, Giancana suggested using poisoned pills – six of them. But despite gaining access to officials inside the Cuban government, the plan had been unsuccessful, and was later scrapped in the run-up to the failed Bay of Pigs invasion. It is said the agency was able to retrieve all the poison pills.

The closest the Americans got to killing Castro was with a poisoned chocolate milkshake, Escalante claimed to Reuters. According to the 2007 documents, another batch of poison was delivered through the Mafia in 1963 in a bottle of Bayer aspirin pills. An opposition group, it was believed, had a good chance. But the plot failed when a disguised waiter did not manage to lace Castro’s milkshake in the cafeteria of the then-Hilton Hotel (now Havana Libre), as the pill got stuck in the freezer – where it was hidden – and broke apart when the assassin attempted to dislodge it from the wall.

This was not just about spiking drinks or cigars. The CIA went all-out. After a failed attempt to embarrass El Comandante by having his beard fall out due to boots spiked with chemicals, the agency had opted for a box of cigars spiked with LSD. The plan was to have Castro burst into laughter during a televised interview, thus subjecting him to ridicule in the public eye. But it was not just cigars. The CIA planned to lace the entire studio. This plot was not implemented, but was high in the running for ways to spark a national uprising against Castro.

The CIA had back-paddled on another of its ingenious plans to kill Castro, leading to the poisoned scuba gear idea. The agency knew the revolutionary was an avid diver. The plan had been to attract El Comandante with a sea shell practically impossible to miss, having been painted in colors bright enough to attract him. Castro would swim closer to inspect it, whereupon a lethal amount of explosives would detonate. But the idea was aborted due to impracticality, the declassified documents claimed. So the spies went the more practical way: lacing Castro’s scuba gear with tuberculosis to trigger a deadly skin disease. The man who was supposed to give Castro the suit had opted to give him an ordinary one, it turned out.

4) Evolution of the poison cigar – the exploding cigar

According to a Saturday Evening Post report on November 4, 1967, a CIA agent had approached a New York cop with the idea of handing Castro an exploding cigar during a UN meeting. That was reportedly after the plan to poison the cigar had been abandoned. This was despite the poison having already been injected into the cigar, with the CIA dismissing the person tasked with carrying the plan out in the final stages.

However, the exploding-cigar plan also failed due to the double agent changing his mind at the last instant.

One of Castro’s many lovers – CIA informant Marita Lorenz, was also tasked with poisoning Castro in a daring operation involving a secret unit tasked with the assassination – Operation 40. According to the FBI, Lorenz had become a “contract agent” for the CIA, and willingly accepted the task of assassinating him following a miscarriage or an abortion – a story she told in 1959. Castro’s reaction to her not having the child had reportedly enraged her so much, she had eagerly taken up the task. And so she met with CIA double agent Frank Sturgis in 1960, who had handed her a bottle of poison pills.

Lorenz was to drop one into her lover’s drink, containing enough poison to kill him within 30 seconds. But as with the countless other attempts, it did not succeed because Lorenz herself could not go through with it. The mission was wrought with pitfalls. According to Ann Louise Bardoch’s ‘Cuba Confidential: Love and Vengeance in Miami and Havana,’ Lorenz recalled that “They said, ‘we want you to take him out.’” But, “I knew the minute I saw the outline of Havana I couldn’t do it.”

Even then, she had made the mistake of stashing the pills in her pot of cold cream, in fear of being discovered by customs. The substance had stuck to the pills, and Lorenz couldn’t unmix the two. As she attempted to flush the pills down the toilet, Castro –who had got wind of the plot – walked in with a cigar. He removed his handgun from the holster, and handed it to Lorenz with the words: “Did you come to kill me?” According to Lorenz, he handed her the gun and puffed on his cigar with his eyes closed.

“He made himself vulnerable because he knew I couldn’t do it. He still loved me and I still loved him.”

She feared the CIA would kill her for being with Castro after the foiled assassination attempt. Upon her return to Miami, Lorenz never again met with Castro. Later, however, she had a daughter with another Latin American military leader, Venezuela’s Marcos Perez Jimenez.

According to Escalante, it was the Cuban revolutionary’s vigilance and the efforts of his security apparatus that kept him alive all those years. Numerous books have been written on the matter.