US and NATO Atrocities in Afghanistan, AGAIN!

A resolution passed by the House in the US in December 2014 calls for “the President, in consultation with Congress, to conduct a review of the force posture, readiness and responsibilities of United States Armed Forces and the forces of other members of NATO to determine if the contributions and actions of each are sufficient to meet the obligations of collective self-defense under Article 5 of the North Atlantic Treaty, and to specify the measures needed to remedy any deficiencies…” In other words, “let’s get ready for war with Russia or China or someone else.”

The resolution is still there and what will Hillary Clinton do about it, if becoming president? Get it in to force?

This is a dangerous and costly direction. Using diplomacy, rather than poor substitutes for it, would save money and lives, while allowing us to prioritize useful projects and collaborate with our international allies, including Russia, China and others. This is a moment in which we all must raise our voices to make that change. We must do this, not only for our self, but for the sake of coming generations! So US citizens must stand up against warmongers who ever is in charge in Washington.

But look what‘s happening in Afghanistan and which typically has gone under the radar in world news in the wake of US elections. Once again have civilians been bombed and killed by US and NATO war planes in operations against Taliban. See the article bellow and ask yourself: Is this example what we‘ll have to expect even more of when Clinton or Trump comes in charge?

US Airstrikes in Afghanistan Kill at Least 30 Civilians

«This was a horrible incident,» said Kunduz governor

The incident began when a U.S.-Afghan raid targeted «two senior Taliban commanders» in the northern province and the troops came under heavy fire, killingtwo American servicemembers. Then, the NATO-led mission said on Twitter, airstrikes were carried out  «to defend friendly forces under fire.»

Airstrikes were conducted in #Kunduz to defend friendly forces under fire. All civilian casualty claims will be investigated.

To clarify, US forces conducted strikes in #Kunduz to defend friendly forces. All civilian casualty claims will be investigated.

Those airstrikes caused the dozens of casualties.

«Unfortunately more than 30 civilians, including women and children, were killed during the fighting,» Reuters reports Asadullah Amarkhil, the governor of Kunduz, as saying. «This was a horrible incident,» he said, adding that dozens of people were also wounded. 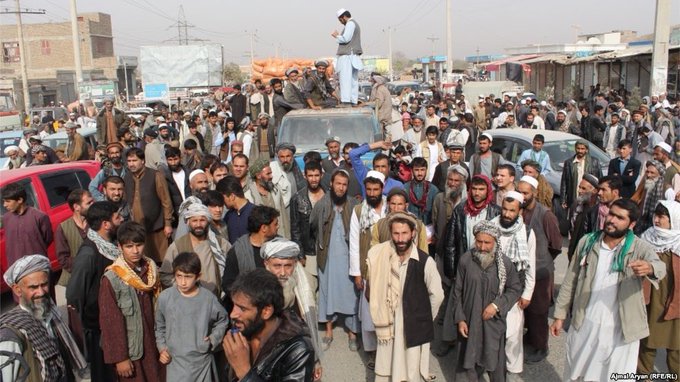 The U.S. military released a statement expressing condolences for the servicemembers» lives lost. It does not mention the allegations of the civilians killed.

«I was deeply saddened to learn overnight that we suffered casualties in Afghanistan,» said Defense Secretary Ash Carter in the statement. «The two service members killed and the four who suffered injuries were with Afghan forces as part of our train, advise, and assist mission.»

U.S. Army Brig. Gen. Charles Cleveland, a Kabul-based spokesman for the coalition, did say in a statement that «The entire event, both the death of U.S. service members and the civilian casualty allegations, are now under investigation.»

Agence France-Presse and Reuters report that the deaths of the civilians sparked protests by residents who carried the bodies of those killed through the city.

Among them was 55-year-old Taza Gul, who brought the corpses of seven of his family members outside the Kunduz governor’s office.

Just 13 months before the incident, a U.S. airstrike on hospital run by Doctors Without Borders (MSF) in Kunduz killed 42 people.

Though the U.S. formally ended the war in Afghanistan in December 2014, U.S. forcesremain and military intervention in the country continues. And though U.S. voters will decide in days whether it will be Donald Trump or Hillary Clinton to inherit America’s «longest war,» during this presidential campaign season, «the United States» ongoing military intervention in Afghanistan has been completely forgotten.»