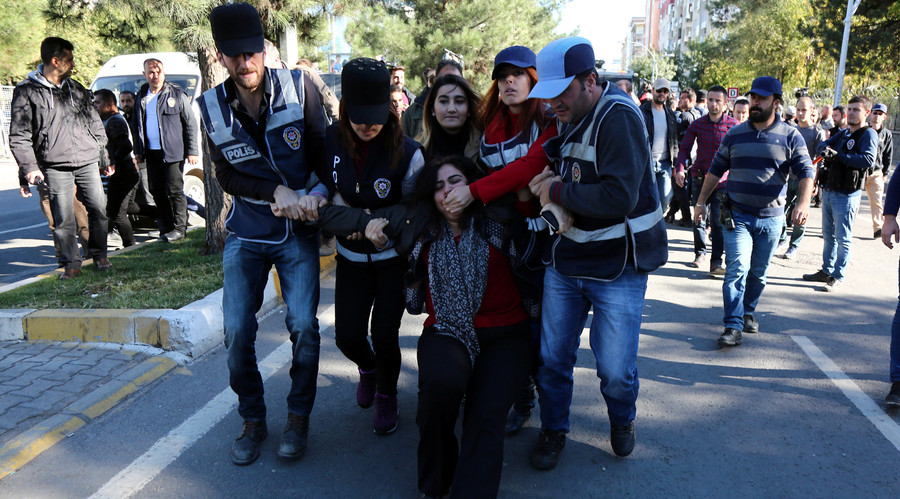 Police detain Sebahat Tuncel, co-chair of the pro-Kurdish Democratic Regions Party (DBP), during a protest against the arrest of Kurdish lawmakers, in the southeastern city of Diyarbakir, Turkey, November 4, 2016. © Sertac Kayar / Reuters
The EU has voiced concern over the arrests of two co-leaders of the People’s Democratic Party (HDP) and at least 12 of its MPs in Ankara and Kurdish-majority areas in eastern Turkey. Germany says the failed coup cannot justify silencing the opposition.

German Foreign Minister Frank-Walter Steinmeier has requested that the charge d’affaires in the Turkish embassy be summoned to discuss the arrests.

“The overnight arrests of politicians and lawmakers from the Kurdish HDP [Peoples’ Democratic Party] represent a further drastic intensification of the situation in the eyes of the foreign minister,” the German Foreign Ministry said in a statement, adding that the failed coup attempt that took place in July “can’t be a justification for silencing or even imprisoning the political opposition.”

France also criticized the arrests of Kurdish politicians. “France calls on Turkey to respect the rule of law and fundamental rights,” including democracy and freedom of the press, Foreign Ministry spokesman Romain Nadal said.

“The arrests risk fuelling the already existing tensions in the country. Turkish government should return to dialogue with the opposition. Peace process with the PKK is necessary for the country’s further democratization and stability,” she said in a statement.

According to UN human rights spokeswoman Ravina Shamdasani, the arrest of pro-Kurdish lawmakers may go “beyond what is permissible.”

Two co-leaders of the People’s Democratic Party (HDP) in Turkey and at least 12 of its MPs were detained as police raided their homes in Ankara and Kurdish-majority areas in the eastern part of the country.

On Friday morning, the Turkish Interior Ministry published a list of 11 of the detained HDP members, stating that they had been arrested on the orders of the local prosecutor. Another two MPs slated for arrest were found to be outside the country.

The lawmakers were arrested after “failing to appear for a summons to testify as part of a counter-terrorism investigation,” Anadolu state news agency reported. The testimonies are connected to “terrorist propaganda”investigations related to the Kurdish militant group PKK and pro-Kurdish protests that ended in violent clashes in October of 2014.

“I will not hesitate to be held accountable in front of a fair and impartial judiciary. There is nothing I cannot answer for,” HDP co-leader Selahattin Demirtas, who was detained in his house in Diyarbakir, said in a statement to the prosecutor.

Police in Diyarbakir broke into the home of another HPD co-leader, Figen Yuksekdag, and detained her early on Friday morning.

Turkish pro-Kurdish opposition lawmaker Imam Tascıer wrote on Twitter later on Friday that he had also been detained, becoming the 12th lawmaker arrested in the crackdown.

According to Turkey Blocks, an independent organization that monitors internet censorship in Turkey, access to Twitter, Facebook, and the social messaging app WhatsApp has been severely restricted by the major providers, adding that “the majority of internet users [are] affected at the time of the measurement.”

However, it added that the shutdown has not affected the users of smaller providers so far.

The HDP responded to the raids through social media, calling on the international community to “react against the Erdogan regime’s coup,” Reuters quotes.

The HDP, which is in strong opposition to President Recep Tayyip Erdogan’s government and supports the Kurds and other minorities, has been accused of having links to PKK, which Ankara considers a terrorist organization.