THE PEOPLE HAVE SPOKEN! At last a major blow to the elitistic project of the European Union. 51,9 percent voted NO. 72 percent of the population participated in the referendüm. Britain will leave the EU!

This is a symptom of mistrust, not only in Britain, but through the hole of EU. The markets have as expected reacted to the NO-vote, the capitalists are shivering, the anti-establishment are happy, the people are looking for a more democratic, more anti-elite and more human Europe. But, remember, capitalism is still in charge and the right-wing nationalists are on the move. The main index in Britain have fallen 4,7 percent and share index with 8,5, in Germany 7, France 7, Italy 10 percent. The bank shares have fallen sharply and the City of London are in «limbo». The Pound have fallen, so have the Euro.

It‘s rather funny to follow the reaction of the European political elite after the Brexit became reality: They more or less unanimously stated that Britain was on a very dangerous path when leaving EU. Dangerous for who, the people of Europe or the elite? The answer, I presume, will ultimately express itself. 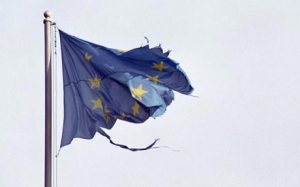 This result of this very important referendum is obvious a reaction of the alienation of the citizen towards the elite and bureaucracy in Brussels. The lack of democratic processes and transparency are major factors of peoples mistrust. Another thing is that this NO-vote can be linked to the aftermath of the economic crisis from 2008, which resulted in harsh austerity measures and cut-policy, also in Britain. After this vote for NO the implications are not what the remain campaign over and over again tried to brainwash the population with: «This will be an economic disaster for Britain and for all of you, here and there.» No, the disaster will be for the politicians and their capitalist friends. They will sooner or later loose faith and power from the people. It might well be a disaster for the EU-Troll as well. This monster of new-liberalism and richness for the few.

So, a message to State and EU leaders who had the arrogance to interfere with their support and propaganda for the remain campaign: Obama, Merkel, Hollande,  Tusk, Jünker and the Norwegian prime minister: «Your interference did the opposite of what you hoped, and the answer from 51,9 percent of British people was: Stay back you imperialists, we decides this ourselves¡»

Now, this is a real opportunity for the European left to a commitment of better organizing and for a better and different Europe. We must not let the nationalistic and inward minded extreme right movements take advantage of Brexit. They can be a real danger in several countries unless the left and the labour unions among others, take real stand against them and also show the European people different socialist alternatives for the future. And by that also internationalism not nationalism!

And, let‘s un not forget the political and racist motivated killing of labour MP Jo Cox:

See this interesting articles from socialistworker.co.uk and globalresearch.ca:

After EU vote and Cameron goes: unite to shape revolt against establishment

An anti-racist, anti-austerity and socialist case to vote Leave

Part of the European Union? What Should Socialists Argue in the UK Brexit Referendum?