‘Bizzare to be lectured by Americans’: Boris Johnson trashes Obama ‘hypocrisy’ over Brexit

London Mayor Boris Johnson believes any US support for the anti-Brexit campaign would be “bizarre” and hypocritical, given the US “wouldn’t dream” of diluting their own authority.

It is expected that US president Barack Obama will use his April 21 visit to Downing Street to recommend the UK stay within the European bloc.

However, Conservative MP and Brexit campaigner Johnson has criticized the suggestion, saying that Obama advocating an anti-Brexit vote in the June 23 referendum would be “hypocrisy.” 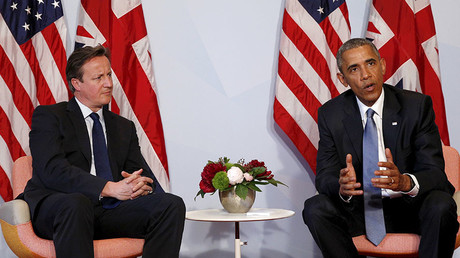 Brexiteers tell Obama to let Britain decide its own fate

“I just find it absolutely bizarre that we are being lectured by the Americans about giving up our sovereignty and giving up control, when the Americans won’t even sign up to the international convention on the law of the seas, let alone the International criminal court,” he told the BBC.

Tory MP Johnson broke away from Prime Minister David Cameron’s stance on Europe to join the Brexit movement earlier this year. He said the only “real risk” was “Bremaining” within the European Union.

Pig Book: The most expensive ‘pork barrel’ projects in the US budget this year

“I think staying is the real risk. I think that what you need to focus on is the risk of ‘Bremaining’.

In a major sideswipe at the EU legislature, he said the current system was “pork barrel” politics and “anti-democratic” since “it takes away from ordinary people the ability to dismiss at elections the people who make crucial decisions about their lives.”

Johnson also condemned any US intervention on the Brexit referendum in a newspaper column last month.

Referring to the US as “Uncle Sam,” he called an Obama intervention in the debate “a piece of outrageous and exorbitant hypocrisy” since America defends its own sovereignty with “hysterical vigilance.”

These two countries, Britan and the US, are kicking each others asses.  It show the fierce competition between two major countries in capitalism, in the wake of big crises inside the system. That‘s interesting. Another interesting thing about the London mayor‘s outburst, is his slamming on «uncle Sam (Obama)» and US intervention on the Brexit referendum. USA is the country which doesn‘t exept any interference what so ever in their own policy. YET, they themselves do exactly that: Interfere all over the globe: IT‘S CALLED IMPERIALISM!

Still, the article below, show clearly the imperialist manner of Britan as well, no surprise!

UK military personnel have delivered a series of three-week courses on “international targeting” to the Saudi forces currently engaged in pummeling Yemen, a Freedom of Information (FoI) request shows.

The revelations were made following a request by the human rights NGO Reprieve. The organization is now urging the UK government to stop providing military support.

While the MoD has long claimed its role is purely advisory, the revelations lay bare the closeness with which the two countries operate.

It now appears courses were being run by RAF officers as recently as 2015 on “international targeting” over three separate three-week blocks.

This included training on the Storm Shadow missile, which is launched from aircraft to destroy enemy bunkers.

Gunnery instruction on targeting and locating enemy gun batteries was also carried out by a seven-strong detachment of personnel from the Royal Artillery.

The artillery team delivered 52 hours of training to Saudi gunners and included a senior major, a captain, a sergeant major and a sergeant.

The MoD said the course had been delivered to “a mixed group of soldiers and officers” from the Royal Saudi Land Forces RSLF) field artillery.

Saudi personnel have also visited the UK for training.
The military said their personnel were not involved in “carrying out strikes, directing or conducting operations in Yemen or selecting targets, and are not involved in the Saudi targeting decision-making process.”

They stressed, as they have on numerous occasions, that the UK military “provide guidance on best practice techniques, including advice to help continued compliance with international humanitarian law.”

Reprieve case worker Omran Belhadi said: “Claims by ministers that Britain is helping the Saudi government abide by the law are disingenuous.”

He pointed out that legal training on rules of engagement and the laws of war did not seem to have sunk in if, indeed, it was delivered.

“Extensive British ‘targeting training’ has done nothing to prevent the bombing of schools, hospitals and weddings, and the deaths of thousands of Yemeni civilians,” Belhadi told the Guardian.