Greece – back to square one? 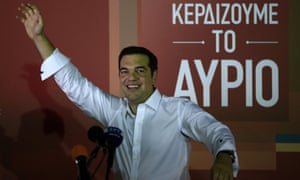 Alexis Tsipras, waves to his supporters after his general election victory in Athens. Photograph: Lefteris Pitarakis/AP

The second Greek general election of 2015 has resulted in a triumph for Alexis Tsipras. His far-left party Syriza is on course to win 35.5% of the vote and 145 seats. The centre-right New Democracy party is set to take 75 seats with 28% of the vote share – virtually unchanged from the previous election.

Meanwhile, the far-right Golden Dawn party confirmed its position as the third force in parliament, gaining a seat compared with January’s election. The party, according to exit poll data, was the preferred option among unemployed voters. How the unemployed voted: 16.6% for Golden Dawn 5.1% for Pasok.

Although Syriza is projected to win fewer seats and a slightly lower vote share than in January, it is worth remembering that seven parties then managed to pass the 3% threshold needed to enter parliament.

Following Sunday’s election, the seven parties will be joined by the Union of Centrists, which is set to win seats for the first time since its founding in 1992.

However, the Popular Unity party that was formed by the 25 MPs who broke away from Syriza – and triggered the snap election – looks unlikely to enter parliament, falling just short of the required 3% mark. Considering that the pro-drachma group held nearly a fifth of Syriza’s seats in the last parliament, they are the big losers of the night.

Once these two factors are taken into account, the result is remarkably similar to that achieved in January.

The most likely scenario is a renewed coalition with Anel. Many pre-election polls had the small rightwing party below the 3% mark required to win seats, but with about 4% of the vote share, the party is on track to win 10 seats – down from January’s 13 – but, with a combined 155 seats, the two parties have the numbers needed to form a government.

Source: The Guardian and wikipedia.org