Over 50 years ago and still top secret? Must be connected to JFK killing… 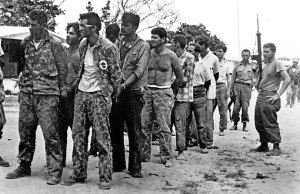 (FILES): This April 1961 file photo shows a group of Cuban counter-revolutionaries, members of Assault Brigade 2506, after their capture in the Bay of Pigs, Cuba. (AFP Photo / Miguel Vinas)

This article is re-blogged from RT:

Over 50 years after the Bay of Pigs invasion went awry, the US federal government is still attempting to keep secrets about the failed overthrow of the Cuban government, with an Obama administration lawyer arguing this week to keep a document classified.

The National Security Archive, a private research institution, has sought to force the government to hand over the fifth of a five-volume internal account of the Bay of Pigs. The four earlier volumes were released under the Freedom of Information Act (FOIA). Penned by a CIA staff historian in the years between 1973 and 1984, the final document chronicles – and presumably critiques – the CIA’s own investigation of how the invasion went wrong.

In 1961, not long after the Cuban revolution had ousted Cuban President Fulgencio Batista, a US ally, American lawmakers were growing nervous about the new Fidel Castro-led government. In a plan organized under President Eisenhower and authorized by President Kennedy, the CIA trained Cuban exiles to act as a paramilitary force that would usurp Cuban troops at the Bay of Pigs in a surprise attack.

The plot fell apart for a variety of reasons, with many of the 1,500 CIA-trained Cubans killed before they could rush past the beach. The Castro government, strengthened in its resolve after the victory, solidified its socialist stance.

Yet the CIA’s interpretation of the events remains shrouded in secrecy. Assistant US Attorney Mitchell P. Zeff told the US Court of Appeals of the District of Columbia, the second highest court in the nation, that “the passage of time has not made it releasable.”

The administration has argued that the fifth volume should remain secret because it falls under the CIA’s deliberative process privilege, a legal theory arguing that the executive branch of government should remain exempt from the normal disclosure or discovery in civil litigation.

The CIA inspector general’s report on the Bay of Pigs – which was made public under a prior FOIA request – issued a scathing rebuke of the plan from top to bottom, taking particular aim at the executive branch’s miscalculations.

Multiple judges on the panel questioned whether the government’s request was plausible, or even necessary. Judge Judith W. Rogers warned attorneys that the CIA’s ability to keep documents free from FOIA requests is “not endless,” and that the records surrounding the 1787 Constitutional Convention were sealed for just 30 years. Moreover, by law, presidential records become public after 12 years following the end of term.

“Here we are, 30 years later,” she said, as quoted by McClatchy newspapers. “The author is deceased. The events occurred long ago.”